Earlier today I saw a tweet from a local pub announcing that they now stock Blue Moon in bottles, with a photo to prove it.

I had a quick check and as far as I can tell the US label says “Belgian White Belgian-Style Wheat Ale” (which is horrific enough in its own way, but that’s a separate issue). As you can see, the UK label proclaims “North American Craft Beer”. 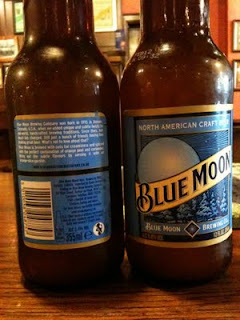 This labelling would of course provoke a shitstorm in the US, as there, unlike here, “craft beer” has a specific meaning closely watched over by the Brewers’ Association. Blue Moon, as one of the speciality brews of mammoth brewer Molson Coors (although they coyly prefer to promote it as ‘Blue Moon Brewing Company’), doesn’t qualify.

Blue Moon has become spectacularly successful in the US as a pseudo-“Belgian” product. Now, seemingly, the approach in the UK is to push it as a pseudo-American product. Over there the suggestible consumer gets the impression it’s from Belgium; over here it’s implied it comes from one of those little US craft breweries he’s heard about. I mean, doesn’t this stuff on the back label sound good:


“Blue Moon Brewing Company was born in 1995 in Denver, Colorado, U.S.A., when we added unique and subtle twists to old-world, handcrafted brewing traditions. Since then, not much has changed. Still just a bunch of friends having fun making great beer.”

You can almost see the guys getting together on a Saturday to fire up a brew in the turkey fryer in the garage, can’t you? Poor sods probably have to stir the mash with a canoe paddle too.

You have to admire the sneakiness of this copywriting, which manages to slip in the feel-good words “handcrafted” and “traditions” without actually claiming those properties for the beer. Read the small print and learn it’s brewed in Canada, presumably at a Molson facility. So, apart from being brewed by different people in another country, no, not much has changed. Sure it hasn’t.

Blue Moon, disingenuous on both sides of the Atlantic.

+1 for Molson Coors on the Suckiness Index. Sorry folks.