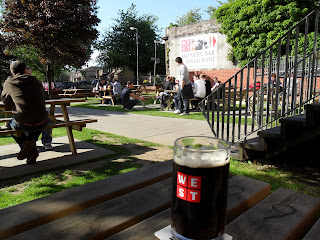 Glasgow is one of the cities around the world hosting Social Media Week and with 120 events has emerged as one of the biggest SMW after New York.

Beer being a social drink (Are there unsocial drinks? Discuss [25 marks]), it seemed only natural to have a social media beer tasting.

The illustrious Pete Brown will be introducing several beers at West brewery on Thursday evening at 6pm and the event will be streamed online. Not only West’s beers will be tasted and discussed but several other breweries will be participating: Harviestoun, nearby Kelburn from Barrhead, and Magic Rock, who are a bit further away and have presumably been chosen due to their competent use of social media. There will probably also be a bit of chat about the use of social media by brewers, pubs and drinkers.

Magic Rock are sending their bottled Human Cannonball double IPA and joining the event via Skype. Harviestoun will be there with their Schiehallion lager and Kelburn are bringing Cart Blanche. If you can’t make it along to West, but can get hold of the beers, feel free to join in with your tasting notes online with the tags #SMWbeer and #SMWGla (like Question Time with beer), or just watch the live stream at http://www.livestream.com/socialmediaweek . It should be fun.
Labels: #SMWbeer #SMWGla beer as social lubricant harviestoun kelburn pete brown social media social media week west
Location: The Skypark, 8 Elliot Pl, Glasgow, Glasgow City G3 8EP, UK