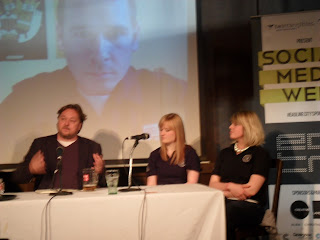 Representatives of four breweries gathered at WEST in Glasgow yesterday evening for a beer tasting as part of Social Media Week. Moderated by Pete Brown, the tasting was intended both to introduce new-wave beer to a wider audience and to discuss the value of social media to breweries and drinkers.

Petra of WEST and brewer Felix were on hand to give some background about the brewery and introduce their beer, WEST Hefeweizen. The beer arrived thick with yeast and still bubbling despite the huge head of foam. It had a strong banana aroma and was remarkably tangy. Felix says the beer is 80% wheat, much more than a typical wheat beer even in Bavaria.

Next to chat to Pete were Harviestoun’s brewsters Amy and Krista who had brought along Schiehallion, Harviestoun’s sometime ground-breaking cask lager which is now also available in bottle and keg.

The last time I had this from keg it was dreadful. Yesterday it was much, much better, a stunning beer packed with spicy hops. I think it rather benefited from having some of the CO2 knocked out of it, but Amy and Krista also said they’re very careful about the carbonation levels in the keg. The pitcher full of beer has a good few centimetres of dense creamy foam on top, and looks deeper in colour than usual due to the greater volume. It was also an educational experience to taste it side by side with the maltier, more biscuity WEST St Mungo lager.

By the time we got onto the third beer everyone on the panel and most of the audience seemed to be quite merry.

Kelburn’s Derek Moore introduced his Cart Blanche. It had suffered a bit from being jugged up from the cellar and is at the lower end of an acceptable carbonation range. It does look a little drab next to the frothy lager and the opalescent wheat beer, but tastes more complex than the more approachable beers from WEST and Harviestoun. It’s enjoyable once you get used to the woody, earthy bitterness of it.

I imagine there must be quite a few breweries like Kelburn for whom social media is still a bit of an unexplored territory. When Derek Moore started up there was no platform for his business beyond what he could build himself. In those days you plugged away brewing real ale and you sold it to real ale pubs who sold it to real ale drinkers. Now there is a platform and it opens up a lot of opportunities for breweries like Kelburn.

One brewery which has grasped social media and used it effectively is Magic Rock, who were invited to take part for precisely that reason. Joining us via Skype from Huddersfield (and the efficacy of their social media use is demonstrated by the fact that I can’t think of any other brewery from Huddersfield), Stu and Rich loomed Big Brother-style on the big screen and quickly became known as the Brewing Overlords of Doom, or something.

Their beer was their double IPA, Human Cannonball. It didn’t seem to create as much of a stir in the room as I expected. Are people used to the idea of a double IPA already? It has a massive dry hop aroma and satisfying bitterness, slightly syrupy crystal malt and just a slight touch of booziness. We end up in a discussion of the forthcoming duty increase on strong beer and its effects.

By this stage we had overrun by 100% of the planned tasting time and it was time to wrap up. It was a great presentation of some very different beers and pleasant to see that brewers from different traditions can get on when there’s nobody deliberately trying to drive a wedge between them.