Analysis of German Ale and Porter 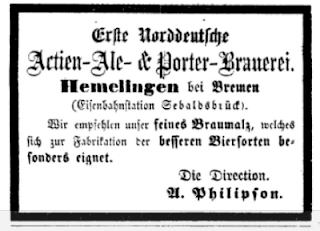 What joy. I’ve found an analysis of the beers produced by our old chums the Erste Norddeutsche Actien-Ale- und Porter-Brauerei. Remember them? They were making IPA in Bremen, Germany in the 19th century. Here’s the article from the Allgemeine Hopfen-Zeitung (Nr. 14, 3 Feb 1870):

It is pleasant to report, and certainly also of interest to the esteemed reader of this paper, that the German beer culture has reached a stage in respect of the so-called English beers, where it can bear comparison with the long-famous English original. In Hemelingen near Bremen a joint-stock Ale and Porter brewery has been established, which under the command of Director A. Philipson produces beers, which according to the analysis I have performed are not only equal to the English, but deserve to be preferred. I shall present the analysis and let the numbers speak for themselves.

[Note: I am not at all confident about the translation here. I’m not an organic chemist, and 19th-century terminology is weird.]

Porter. The high content of organic nitrogenous components, and the absence of alien ingredients that do not belong in porter-beer, the rich content of malt extract, the extremely balanced proportion of alcohol to malt all justify my labelling this porter excellent. In particular the high ash content and the proportionate balance of its component parts are deserving of praise, as is the complete absence of lactic acid. This bears witness to a very rational manufacture and is something which differentiates this beer most honourably from most which are imported from England.

Ale. The Ale prepared by the Erste Norddeutsche Aktien-Ale- und Porter-Brauerei zu Hemelingen can be described as a beer especially rich in extract. The chemical analysis, which is the only way to determine the genuine worth of a beer, proves definitively that the ale has been produced in a rational manner without any artificial additive.

A normal balance reigns amongst the elements belonging to the malt extract. The quantity of alcohol contained in the ale relative to the malt extract is evidence of a professional and rational manufacturing method. Of the many sorts of ale imported directly from England which I have often had the opportunity to examine, this beer earns preference due to its high content of nutritious substances and the complete absence of alien elements.


Did you notice that? The company was headed by A. Philipson, doesn’t sound like a German name.  So there was a British element in the company. Bloody foreigners, coming over here, brewing ale and porter …

I don’t fancy going down the pub with Dr. Werner though, with his insistence that you can only tell if a beer is any good or not by chemically analysing it. Speaking of analysis, now I know that “Schleimzucker” is 19th-century German for galactose. You never know when that’s going to come in handy.

The brewery was still very new at this time: it had raised its starting capital of 300,000 gold Thaler in July 1868 with the with the objective of “producing ale and porter in excellent quality” for the Customs Union [i.e. Germany] and overseas markets (Zeitschrift für Kapital und Rente, Stuttgart 1869). The following year it suffered a fire on 5th May. (Deutsche Industrie-Zeitung (Chemnitz), 13 May 1869). As we can see from the advert at the top, it was also selling malt to other brewers.

In 1880 it was restructured as the Hemelinger Aktienbrauerei which was later taken over by Beck’s. Beck’s finally closed the brewery in 1985 and in 2008 the rights to the name were bought by a local drinks wholesaler which hoped to revitalise the brand.