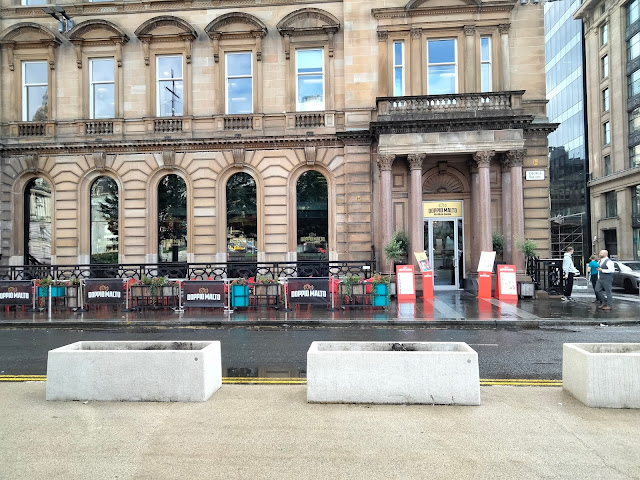 For the last two years or so (at least, that’s how long it feels like), I’ve been seeing adverts for Doppio Malto, who were, it was promised, just about to open up in Glasgow.

I know little about the company other than that they have two breweries and a number of restaurants in Italy and a couple in France. The name comes from an Italian beer category, which in English terms is a little bit like calling yourself The High Gravity Brewing Co.

Why add Glasgow? Why not? A rapid expansion is apparently envisaged, with talk of up to a hundred restaurants across the UK.

Although it’s a chain, I am told that it’s still family-owned. I was not really expecting to be impressed, but when the enormous site on George Square (formerly the main post office and latterly a Jamie Oliver restaurant) finally opened a little over a week ago I did consider it my duty to check it out. 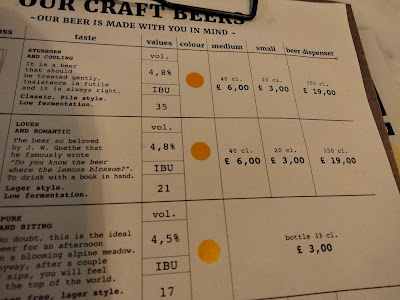 My first beer is La Leila (4.8%, 21 IBU), a reasonably impressive pale lager. It presents well with a good head of foam, unlike the thin scum atop fizzy beer often encountered in this country. It smells good: fresh Pils malt and aromatic noble hops. Full-bodied and malty, perhaps a little too full-bodied for my liking, and there’s a honeyish note I don’t like, but overall it’s enjoyable.

La Leila, according to the menu, was the beer beloved by Goethe, a claim so obviously ridiculous that it’s almost admirable.

My first impressions of the bar are that I don’t like the bizarre teal and scarlet colour scheme – at least it makes a change from the ubiquitous bare bricks and Edison lightbulbs of “craft beer” bars. The staff (and there are a lot of them) are walking around very quickly, but despite this it takes a long time to get a beer. 25 minutes into my visit I’ve acquired and consumed one single small beer, and I’m still waiting for my next one. In Cologne I’d have had four in that time, and it would be me trying to keep up with the waiters. 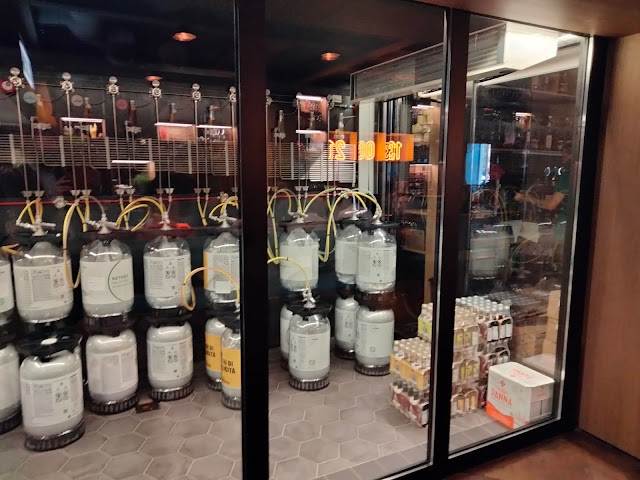 It‘s the first night so I shouldn’t be too harsh on the staff, who are still finding their feet. They are all very pleasant, but it’s a bit slow and one is served by a bewildering variety of different people.

The set up seems simple enough: next to the bar is a glass-fronted (chilled?) room where all the beers are in one-way keykegs. That might go some way towards explaining the prices, which are on the high side. Like for like, the extremely trendy Koelschip Yard bar on the south side is cheaper. Then again, the cost of this location slap bang on George Square must be sky-high.

Pricing structure is one size fits all: £6 for 40cl, £3 for 20cl, irrespective of the strength of the beer. These measures are of course illegal in the UK, and it makes me wonder what the company’s local advisors have been telling them. You can also have a “dispenser” containing 1.5L of beer for £19. These things, rather reminiscent of an old-fashioned bubble gum vending machine, are filled from the tap and topped up as needed with a jug, so there is little danger of it being too fizzy. This dispense probably does the beer little good, but it’s the kind of nonsense punters love.

Flights of the beers are available – however, they make no economic sense. They are £12 for four beers, and you get 15cl of each one. But four 20cl beers also cost £12 and you get 25% more beer. Unless you get a private tutor talking you through them or something, this seems a poor deal.

Each beer is served with a mug of popcorn and you eventually have to tell them to stop bringing it. The beer list is ordered in ascending order of colour, palest to darkest, which is a good a way as any of doing it, irrespective of what beer educators might try to tell you.

The second beer I try, La Pils (4.8%, 35 IBU), is, disappointingly, less aromatic than the first one. Decent, good malt flavour and a robust bitterness, but doesn’t have the hop aroma a proper Pils should have, and the foam collapses alarmingly quickly.

The menu has apparently been translated directly from Italian without a native English speaker looking at it; this is rather charming in its own way, but we are treated to beer descriptions such as “high fermentation” and “low fermentation” rather than the more usual top- and bottom-fermentation. This doesn’t bother me too much, as it’s meaningless to most drinkers anyway, and at least it’s not “ale” and “lager”.

The third beer, La Bitter (5.0%, 60 IBU), is genuinely impressive. Golden, clean and deliciously bitter, it’s rather reminiscent of the sort of pale ’n’ hoppy beer that Fyne Ales have made their trademark. This is called Special Bitter on the menu. Unless there is an Italian style called Special Bitter that I don’t know about, I’d place this closer to a west coast IPA than an ESB.

Drinkers looking for an ESB type would be better served with La Mahogany (6.0%, 54 IBU), which is indeed an attractive mahogany colour, even though this is described as an IPA. Caramel, malt, a little manure, earthy English hops. Satisfyingly bitter, I really like the hop flavour on this one.

To sum up: the beer – there are several more types as well as the ones I tried – is actually pretty good, as is the food. While it’s pricey, it’s not beyond the pale for the city centre (food is rather more reasonably priced than beer), and you can certainly pay more for much worse in Glasgow. Those UK-based chains who are still serving up microwaved food and multinational brands of wet air could perhaps learn a lot from Doppio Malto.