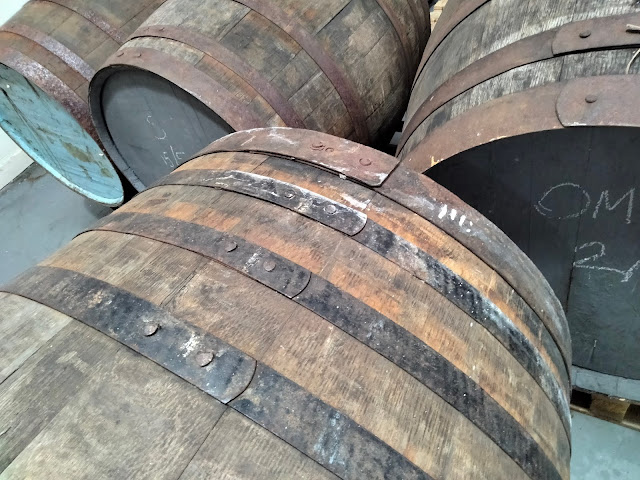 It were like climbing to t’top of t’world when I visited Gareth Young’s new brewery, but the view over the city is worth it. So is the beer.

He occupies a unit on a small, windswept industrial estate at one of central Glasgow’s highest points, overlooking the motorway and the city centre, which with the recent flash flooding and predictions that Govan will be underwater by 2040, sounds like a wise decision.

Possibly the most erudite of Scottish brewers, Young deserted the world of academic philosophy to devote himself to a study of eighteenth- and nineteenth-century brewing literature instead, and Epochal Barrel Fermented Ales is the result.

A skilled home brewer, he has set up his small brewery in Port Dundas to make beers influenced by the way it was done two hundred years ago. His beer is fermented with a multi-strain yeast, cleansed to rid them of excess yeast and then allowed to mature to completion in oak barrels with a handful of whole-cone hops. The finished product is naturally carbonated in the bottle.

In terms of flavour, this is like the difference between a farmhouse cheese and a block of Tesco cheddar. Old-school beers – before the big brewers cleaned them up – must have been an explosion of flavours: not just malt and hops, but a characterful yeast strain; sulphurous water; tannins from the wooden cask; “aged” flavour from Brettanomyces, the yeast which lives in the barrels and imparts its distinctive flavour and aroma to each beer.

This last aroma will be familiar to any consumer of Belgian lambic, which is possibly why some retailers and media have described Young’s beer as “Belgian-influenced”, though he disagrees. He sees himself rather as a revivalist of old-fashioned British beers – after all, Brettanomyces means British fungus, not Belgian fungus. This flavour characterised the porter, pale ale and imperial stout that made the reputation of British beer around the world.

This is not academic speculation. Young shows me the empty bottle of a McEwan’s pale ale retrieved a few years ago from a Victorian shipwreck in the Clyde. While most very old beers are muddy and oxidised beyond recognition, it turns out conditions at the bottom of the river – cold, dark, pressurised – can keep a beer drinkable, and Young says the same hop and Brettanomyces flavours were still present in the beer that sank with the Wallachia in 1895.

When I suggest that the selling points “Scottish” and “barrels” might get Epochal lumped together with Innis & Gunn in foreign markets, Young gives me a look that suggests the idea had not even occurred to him. “We are different markets, I think,” he grins. There is, in truth, not much overlap between his beers and the output of Innis & Gunn, which is Scotland’s best known beer to much of the world, although little of it has really seen the inside of a barrel.

Although Epochal bills its beers as barrel-fermented, the real heart of the brewery seems to me to be a 60-year-old Grundy tank originally made for Ansells of Birmingham. This is used to “cleanse” the beer after primary fermentation.

After two or three days in open fermenters (open as in unpressurised – there is a lid on them) the beer is transferred to the tank, which acts as a “MacGyver Burton Union” as Young calls the set-up. The tank is filled to the brim and fresh yeast is expelled from the overflow. This enables Young to harvest yeast of the best quality, even better than skimming it from the top of the fermenting beer. “It flocculates better, it attenuates better,” he says. 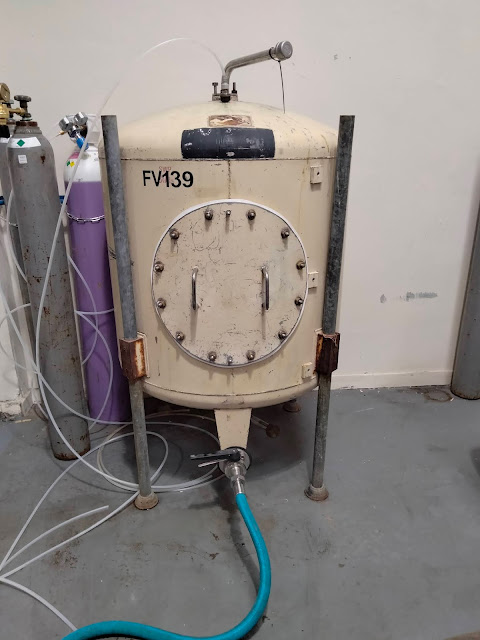 Cleansing – getting the beer off the yeast and trub – is something Victorian brewers were obsessed with, and Young points out that certain highly regarded modern brewers either centrifuge or filter their beer pre-maturation, which really accomplishes the same thing with more technology. If the beer isn’t cleansed properly you get autolysis and a “dull, waxy” character in the finished product.

Then the beer is transferred to the barrels, an assortment of ex-whisky casks with the cask ends painted over to hide the name of the original distilleries. These have been rinsed thoroughly to get rid of any remaining whisky character, something Young does not want in his beer, yet when I stand over the barrels I can still detect the whisky scent in the air. The beer doesn’t stay in the oak for long – weeks rather than years. Once Young judges it ready the beer is transferred back to the tank for bottling.

Young is a big fan, he says, of heavy hopping with classic European hops such as Goldings. These have quite a different effect on mouthfeel and flavour when used in quantity. The processing is also important: he is using suppliers such as Brook House in Herefordshire and Locher Hopfen in the Tettnang. “They dry their hops at low temperatures in a way that would have been common in the 18th century, but isn’t common now,” he says. From Locher a revived, once-extinct hop variety, Rottenburger is on the way. Young has contracted to get his Rottenburger as whole cones, the way he prefers, because most of it is pelletised. Even if some German brewers do get some, they won’t be producing an oak-fermented Scottish pale ale with Brettanomyces. It’s one way to make your beer stand out.

A cask which is due for bottling is made with Goldings and Fuggles, and Young pulls me a sample – old style, using a nail in the wall of the barrel as a makeshift tap. This is made from all pale malt, though it is so pale that it looks like Pilsner to me. “You get fruit from the fermentation and then the earthy, musky, floral character,” says Young. This has been in the oak for roughly a month.

We have been banging on about English hops for the last ten years with frustratingly little effect, so it’s good to see at least one brewer using them as the focus of his beer. He does use a few American hops, but for a complementary touch rather than for bittering. The second beer I get to try is also mostly Goldings but has a touch of Centennial added and a further dose as dry hops, which produces a curious, but very pleasant pineapple flavour. This is 6%, less bretty than the first and I think it would make an outstanding cask beer if any pub could be convinced to sell it.

The hops do vary a fair bit, so all bets are off on whether this beer will taste the same next time. Variation comes because the whole-cone hops tend not to be blended for consistency, just harvested and packed.

Perhaps it is time to abandon the big-brewery conceit that any beer can be made in any brewery with commodity ingredients. Young’s philosophy is to embrace the variance and to accept that his equipment is also leaving its own character on the beer.

Epochal’s house yeast contains various strains, of which the dominant one is diastatic, which means it can digest carbohydrates as well as sugar, leading to a very dry beer; however, unlike most such yeasts it doesn’t produce phenolic esters. “I thought it would sharpen up the difference between what I’m doing, and saisons, if it didn’t have that saison phenolic character.”

This difference can perhaps best be tasted in the 9.1% Et Ultra. This beer is strong, sweet and highly carbonated, things we expect from a “Belgian” beer. Yet it doesn’t have the phenolic spiciness that a similar brew from Belgian brewers might have: instead there’s an oily hop-suffused smoothness and a bitter finish despite the high gravity. This one is still very young, so the Brettanomyces is quite subdued and I think it might benefit from six months or a year in the cellar. The real highpoint of this beer is the thick shaving-foam head which, spooned out, is like eating a Tettnang ice-cream. 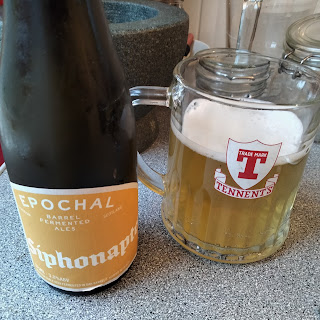 The brewery will be focused on bottles to begin with, but there will be some draught beer – not very much, mostly for festivals and perhaps once the brewery can operate as a taproom, hopefully as soon as next spring. 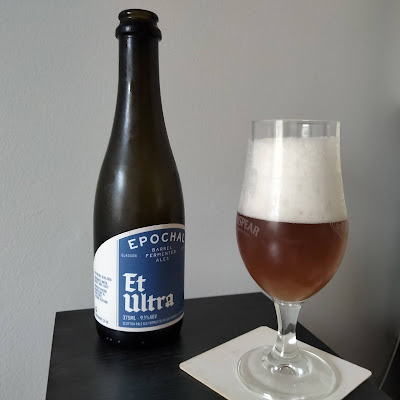 Young has as yet released four beers commercially: as well as Et Ultra, there is the exquisitely well balanced Ad Infinitum (5.5%, lemon, fresh cream, white pepper, a slow-building bitter finish with a slight mintiness); Ethereal Substance (6.8%, floral, perfumey, cinnamon and cedar pencils); Siphonaptera is a “table beer” (3.8%, hopped generously with Saaz, initially a little too dry but it grows on you). All the beers display the house character. I think Ad Infinitum is my favourite.

There’s something to be said for being a specialist, says Young. “If you are basically a New England IPA brewery but have a few barrels festering at the back, I don’t think anyone cares. Things are so busy now, you need to be distinctive. You can’t do the same thing as everyone else and expect to do well.”