I am convinced that breweries do some things on purpose to make me look an idiot. Just a couple of weeks ago I wrote, optimistically: “With both Tennent’s and McEwan’s now owned by companies for whom they – for the first time in several generations – are an important part of the business, I’d like to think that these formerly ubiquitous behemoths of Scottish brewing will find their way back to making really distinctive beers.”

After Tennent’s escaped from the clutches of InBev, whose marketing team now specialise in floundering about launching failure after failure on the market, I hoped that we would see interesting new beers that capitalise on the brewery’s heritage. Reading about the launch of the new beer from Wellpark, it is as if they are deliberately mocking me.

The new beer, Caledonia Best, is a 3.2% “balanced” (i.e. hopless) ale to be served from nitro-keg. Does that sound familiar? It should do. Spot the difference. 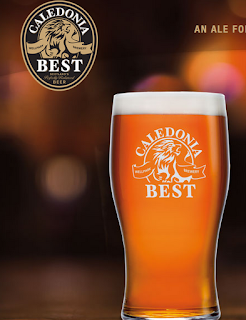 The beer is an exact match in colour and ABV with the established Belhaven Best, which is one of the nastier liquids brewed in Scotland yet miraculously secures 37% of the draught ale market. Not only that, Tennent’s have matched the name and colour scheme as far as legally possible. It looks like one of the own-brand products you see in supermarkets with the package design made to resemble the market leader.

Owner C&C has set aside £1m to develop and market the stuff, so basically they've spent a fortune getting into the fastest contracting sector of the market: a market their principal rival already has all sewn up.

Apparently it’s taken five separate agencies to come up with this, as marketing mag The Drum reports:


JKR created the font and brand identity for the new product, while Multiply handled the point of sale and Newhaven will be the ad agency involved. MPG is the media buyer and Burt Greener Communications will handle PR.