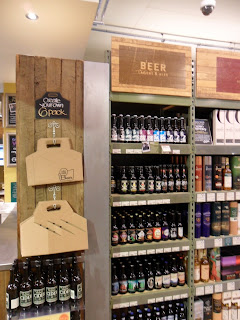 When it comes to beer, Whole Foods has a lot to live up to. The chain is well known in the United States for its beer selection and not a few beer lovers have been watching closely for clues about what would be stocked in the Giffnock store which opened last week.
A relatively small area is given over to beer — one large chiller and a couple of shelves. This is not as stingy as it sounds because only premium products are stocked. Peroni and other “world beers” are about as downmarket as it gets.

There is very little that you can't get elsewhere in Glasgow, which is a bit disappointing, but it’s a solid selection with the complete range of bottled beers from Fyne, Inveralmond, Black Isle, Colonsay etc. For imports there are a few Belgian specialities, the mighty Schlenkerla Märzen, a few dull wheat beers and sixpacks of Anchor and Flying Dog.

Whole Foods is also surely the first supermarket in Scotland to sell draught beer. I wondered whether they would transplant this practice over from the US, and they have. You can buy a 1 litre flagon and get it partly filled from one of three draught beers — two keg and one cask. Partly filled? Yes, because (and readers with a knowledge of UK licensing laws will know what’s coming) 1.5 pints is the largest legal amount of draught beer that can be filled into a litre bottle. Two pints is just a bit too much to fit. One and a half pints leaves you with a large amount of headspace, which is bad news for the beer. Agitate the bottle on your way home and you've got a lot of foam and flat beer. 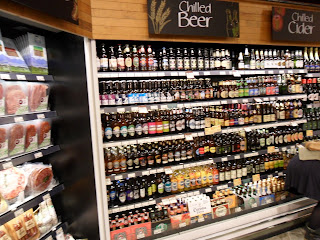 I bought one anyway and got it partly filled with West St Mungo. Thinking of the potential problems I opened it immediately I got home to enjoy the beer at its freshest (theoretically the beer could also get badly oxidised from running down the side of the bottle and being shaken about in transit). St Mungo is often served too fizzy at the brewery, so was just right for having some of the CO2 shaken out of it on the way. I drank half and put the rest in the fridge. When I came back to it a few hours later it was too flat to be enjoyable. 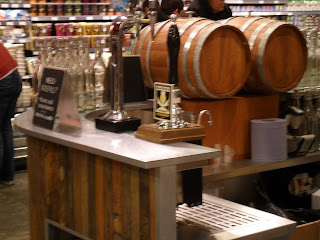 This is a shame, as it means that the ultimate in ecological off-sales, cycling home with beer in a refillable flagon, is a complete non-starter. You have to drive it away in the boot of a car with good suspension, negating any environmental benefit. Whole Foods really need to re-think this flagon.

Good on them for trying to sell cask-conditioned beer too, but I wouldn't like to speculate what sort of shape your cask ale will be in by the time you get to drink it. If you’re thinking of indulging in one of these flagons, probably best to drink the contents as soon as possible, rather than wait out the three days they claim it’ll last. In view of the poor keeping quality and probability of wastage, a lot of mugs like me will probably get a fill once and then go back to buying packaged beer.
Labels: beer bottled beer draught beer giffnock refillable bottles supermarkets whole foods
Location: Giffnock, Glasgow, Glasgow City G46, UK