Approaching the end of this year, it seemed the worst was behind us.
Pubs were open again, beer festivals happened, travel was possible. I was even able to go abroad for a brief trip.
Then Omicron arrived and while it’s not actually being back at square one, in certain respects it feels like it, certainly with regard to beer: Pubs facing the possibility of financial ruin; customers feeling that they’re not safe even if vaccinated; the uncertainty whether forced closure, if it returns, will last long (the last lockdown was supposed to be three weeks and lasted six months) and whether the pubs will survive it.
Best pint: ALL NATIONS HOME BREW. Obviously, I haven’t drunk much cask beer this year. There have been a few stand-out pints nonetheless, some of which might surprise you (they certainly surprised me). In fact, I think the general quality of cask beer might have been above average, which given the general pandemonium around us is quite remarkable.
The Oakham Citra I had on the first day the State Bar was open again ranked pretty high. Adnams Old was in fine form during the JD Wetherspoon festival and I wanted to keep drinking that rather than try the other festival beers. Another great beer was the swift half pint of Saltaire Amarillo I downed in the York Tap while changing trains. I wish I’d had more time than seven minutes to enjoy it.
Most surprising of all was in Ely, where I drank a pint of Greene King IPA and enjoyed it more that any other pint of Greene King IPA in the last twenty years. It was astringent, lightly perfumed, refreshing and delicious and just shows the difference good cellarmanship can make to a beer.
My pint of the year though was when I finally made it to the legendary All Nations brewpub in Madeley, Shropshire and had their ale. I am delighted to say it was every bit as good as I had hoped.
Actually, now I think of it, I have drunk a fair bit of cask beer.
Most missed pub: BLACKFRIARS. I expected lockdown to kill off many more Glasgow pubs than it
actually did. Most of the old reliables opened up again when restrictions were finally lifted. 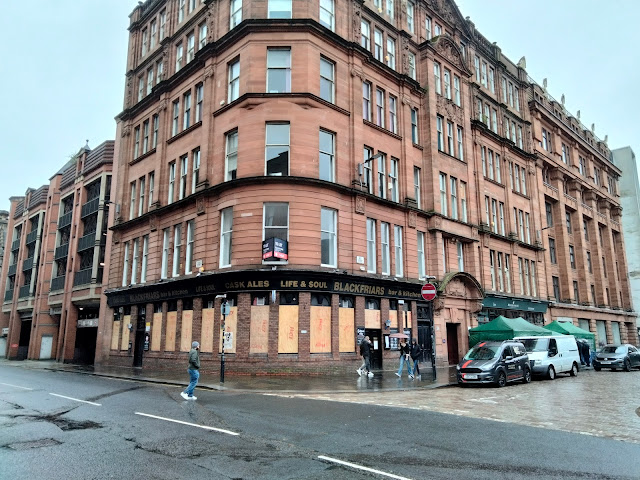 One which didn’t was Blackfriars, which had been one of Glasgow’s leading real ale pubs for as long as I can remember. It was certainly one of the first places I can remember drinking cask beer (Arrol’s 80/– from the long-closed Alloa Brewery) and it was Glasgow CAMRA Pub of the Year several times. It’s still boarded up and the consensus is that it’s not opening again.
The unit is in a desirable location and will probably be snapped up by someone, but going on recent developments any new operator will target more profitable customers.
I should mention the promising new openings of late 2019 and 2020 that did fall victim to the pandemic: Black Rubies and the Calton Taproom. These never got the chance to earn the reputation they deserved.
It wasn’t lockdown that did for the oldest pub in Glasgow, though. In May the building adjacent to the Old College Bar in High St fell victim to one of the mysterious fires that break out in the middle of the night in Glasgow, when it’s raining, destroying a building on land that a developer wants for other purposes. The pub itself appeared at first to survive (though it’s impossible to say how much water and smoke damage there was), but nonetheless the bulldozers soon turned up to raze it to the ground. 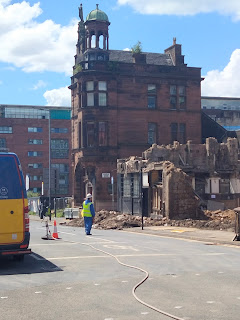 Best Local Pub: POT STILL/KOELSCHIP YARD. As indicated above, in general Glasgow pubs and bars seem to be going backwards rather than forwards in terms of beer. All the trendy money is going into cocktails, and the number of places offering interesting beers is stagnant – which is bad news as there are more and more new breweries desperate for a route to market. All the pubs who think they’re cool offering Beavertown but won’t give a tap to a local brewer, please take note.
Two exceptions to this rule which I have made joint winner: The Pot Still in the city centre, and the Koelschip Yard on the south side. Despite all the trails the trade has endured over the last year, both have gone the extra mile to champion local brewers like Simple Things and Epochal. If only the Yard had opened ten years ago when I lived literally around the corner.
Best Foreign Pub: OUDE SLUIS.  I made it to a total of four pubs outside the UK in 2021 (which is three more than 2020). The best of these was Oude Sluis in Rotterdam, where I got to have a few beers with Ron. It is a lovely place, which as far as I can see, hasn’t changed much in decades.
Foreign Beer: DE RANKE XX BITTER. I should thank Frank for convincing me to give De Ranke XX Bitter another chance. For years I have dismissed it as just an imitation of Orval (and — lowers voice — I’m not the greatest fan of Orval). It isn’t – it has a much hoppier bouquet and less Brettanomyces (if there is any at all). I am newly enamoured of this beer and I recommend you get some.
Best Beer Garden: WEST ON THE GREEN got more of my money than probably any other licensed premises this year. This is primarily due to the fact that it’s one of a very few number of places in Glasgow with an adequate outdoor area, so it was able to open during the long lockdown period when other places couldn’t. In fact, while outdoor drinking continued, Glaswegians flocked back with such enthusiasm to the few pubs that were able to open viably, that it was often difficult to get in anywhere. 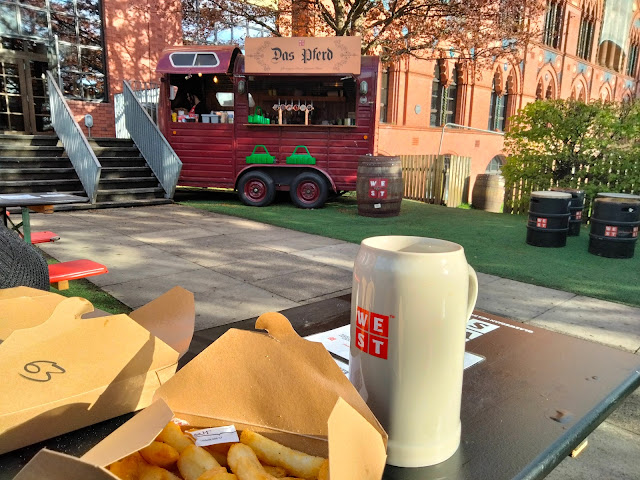 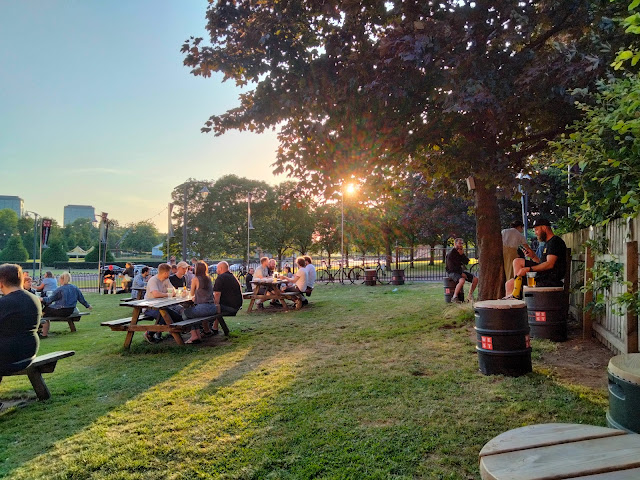 It is not often really beer garden weather in Glasgow, but one early evening in late summer, I looked down the meadow at all the people chatting and enjoying a beer, and thought: yes, this is what this place was meant to become, fifteen years ago.
Best New Brewery: EPOCHAL.  There is not really any discussion about this one. Epochal Barrel Fermented Ales is my new brewery of 2021.
Frozen peas are fine, but sometimes it’s worth the effort of shelling fresh peas. The result in flavour and aroma makes all the difference. That’s how I think of the beers made by Gareth Young at his Epochal brewery just north of Glasgow city centre. They do not slap you in the face with extremity or shock you with the novelty of added flavourings. They just have an extra, subtle edge over more pedestrian beers through their complexity.
Epochal’s beers, coaxing remarkable flavours from unfashionable varieties of hops and deriving additional layers of flavour from maturation in wood and the effects of Brettanomyces yeast, have been some of the highlights of the year.
Best Festival: EDINBURGH CRAFT BEER FESTIVAL. There is no competition here either, because it’s the only one I’ve been to. You will be able to read my thoughts on this festival three months ago in detail some day, if I ever get through my backlog of blog posts. In general, it showed a maturing beer market with less silliness and some very impressive beers being made. (Disclosure: the organisers sent me a free ticket).
Best Minicask: FRESH HOP JARL. Minicasks were the format waiting for lockdown to happen. They have enjoyed huge popularity over the last eighteen months, for obvious reasons.
I confess I have never really liked these things. It’s difficult for most people to fit one in the fridge, for a start. And they’re not any cheaper than bottled beer – but since I learned that the empty can itself costs around a fiver, I understand the reason for that.
My main gripe was the wastage. Usually, the first three pints are all froth and the last three are flat and yeasty. Despite the undeniable fun of tapping a pint from them, they are not really a sensible way to buy beer.
But Fyne Ales seem to have nailed it. Having run a mini-cask club over the lockdown period, they appear to have perfected filling the things so they have just the right amount of gas from beginning to end.
The last minicasks to be released before Christmas contained a special edition of Jarl brewed with fresh, undried Citra hops from this year’s harvest.
The result is not any more bitter or aromatic than ordinary Jarl, so if you were looking for amped-up hoppiness you might be disappointed. The difference is perhaps in a greater depth of hop character: as well as the usual lemon and grapefruit and tangerine, there is menthol and resin, and the scent of opening a packet of hops has made it into the final beer.
Sadly, mine is empty already.
Labels: all nations blackfriars epochal golden pint awards golden pints jarl west brewery