It's that time of year again when we start sitting back and looking over the past year, deciding which were the high points and the lows and wondering whether to go to bed or have another beer and sit think about things some more. In other words, the Golden Pint Awards. 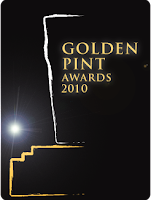 Best brewery: Fyne Ales.
I was remiss last year in describing Fyne as the best brewery in Scotland. It wasn't high enough praise. Over the last year their beer seems to have become more widely available south of the border too, and I don't think I'm the only one who now classes them as one of the top breweries in the UK.


Best beer book: Tim Webb, Good Beer Guide Belgium (new edition).
My phase of infatuation with Belgian beer is long in the past but the book is a really enjoyable read —Webb's writing is full of a bone-dry wit that's so caustic you could clean a brewery with it. [Edit: I've just found out that this actually came out in 2009. Oh well.]

Runner up in this category is the new edition of John Conen's guide to Franconia. It's a beautifully produced volume. I've been visiting Bamberg for fifteen years and there was still information in the book that I didn't know.

Best blog: Gettothepub.com.
Pete writes about pubs so beautifully and with so much love that it often makes me cry. This is a perfect example of how he conveys how a visit to a good pub is so much more than the contents of your beer glass:

You understand why your favourite tea mug is the one with the chip in the rim. Or how you just can’t throw away those old slippers with holes in the toes. You know how a slight shabbiness can be agreeable. You understand the way a certain dog-eared quality can be comforting. Perfection, somehow, is just not our thing: a little roughness round the edges is needed before we can connect. Maybe one of your favourite bits on a record is where the singer’s voice catches or wavers slightly, in a way they can’t reproduce but just happened in the studio at this serendipitous moment which raises your neck hairs every time. And we all prefer the wayward genius of the late Alex Higgins and George Best to a Stephen Hendry or an Alan Shearer.

You quite clearly understand all this very well. If you didn’t, you wouldn’t put up with the ropey template I’m still using for this website. And you wouldn’t be on this website at all, regardless of its design. Because if your soul didn’t rebel against Ikea perfection now and again by crying out for a threadbare sofa, then you wouldn’t really understand pubs.

Best UK Draught Beer: Fyne Ales Jarl.
What is there left to say about this stunning beer? I was lucky enough to taste it at the brewery festival in June. Other people had to wait until GBBF for it; it didn't win an award in London, but did become Champion Beer of Twitter by popular acclaim.
Best UK Bottled Beer: Highland Orkney Porter
Amazing how good this is. It's 9% without being harsh or boozy. It's when you taste a beer like this that you understand the difference between master brewers who know what they're doing, and a bunch of dilettantes just throwing stuff in the mash tun.

Best Pumpclip or Label: No award.
It would be complacent to make an award given that the standards of design for so many are still so abysmally low. Just as dog shit doesn't belong in beer, WordArt doesn't belong on pumpclips and labels.
Best Overseas Brewery: Brauerei Heller Trum.
I keep coming back to Schlenkerla Rauchbier. I love it. Not just because of the smoke, but because underneath the smoke it's one of the world's greatest beers.
Pub/Bar of the Year: The Antonine Arms.
Out in the countryside (well, it's the countryside to me) in Twechar, most people would have advised Andy and Kathy at the Antonine Arms to stick with Belhaven Best and Tennent's when they took over the pub this time last year. But on top of that they have two or three rotating guest beers, often from the most cutting-edge local breweries like Tryst and TinPot, whereas in most village pubs you're extremely lucky to find a single token Deuchars on sale, if they have real ale at all.


Beer Festival of the Year: Market Gallery Pub.
Perhaps not strictly a beer festival in the usual sense of the term, but certainly one of the most idiosyncratic beer events I've been to, and one which united the best of American and British beer cultures in a most delightful way.
Supermarket of the Year: No award.
Morrisons' beer range has declined in my subjective view, Waitrose has improved somewhat, but I don't really go to supermarkets enough to have a definite opinion. In general supermarkets give me a "ho-hum" feeling when I look at their beer.
Best Beer Twitterer: @Glasgowbeer, which is showing slow but steady growth and helps drinkers tip each other off about where there's good beer.
In 2011 I’d Most Like To…
drink a beer made by @crownbrewerstu. I haven't been to Sheffield for yonks and while I've managed to taste at least a sip of beer from most of the "hep" UK breweries, I've still to try any Crown stuff.
Open Category: You Choose
Best beer made by an evil corporate megabrewer, that you can buy in supermarkets: Guinness Foreign Extra Stout. It’s damn good. I hope they don't let the marketing people near it, ever, because they'll wreck it like they've done to every other product Guinness had.
Labels: blogging about blogging crown fyne ales gettothepub.com golden pint awards guinness jarl tim webb