I left the sourcing of my beers for World Cup Beer Sweepstake until the last minute, in the assumption that my local stores have a greater selection of Dutch beer than they actually do. That was a mistake. Alas, no De Molen or Koenigshoven for me. I apologise greatly to all the brewers of more interesting Dutch beer and expect to be rightly castigated in the comments for not showcasing them.

I found myself, purely through my own fault, with several different brands of, well, mass-market supermarket beer to choose from. What's Dutch for cooking lager?

Instead of tasting just one of them, I decided to try several and see how they stack up against each other; both out of curiosity, and of respect for other bloggers who made more of an effort at obtaining rare beers.

The beers I bought were Heineken Lager Beer, Grolsch Premium Lager, Bavaria Pilsener and Lindeboom Pilsener. These fall into the category known in Holland simply as "pils", which is scientifically classed by the Arbitrary Beer Classification Project (ABCP) as style 12F, Crappy Dutch Pils. 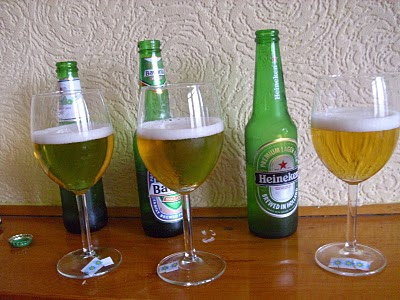 I poured them into identical glasses, marked on the base so I couldn't see which was which, and placed them in random order on the table.

Beer B: Flowery in aroma. Quite fruity taste. Bitterness is low but discernible. Do you know, I wouldn't mind drinking this while waiting for a train or something. Sweet malt; much more body than Beer A. The more you drink this the more watery it seems, but it definitely has the strongest aroma. I guessed this to be Heineken. It was actually: Grolsch.

Beer C: Sweet malt aroma, reminiscent of sweeties. Flowery hops, slight touch of acid and plastic. Slight dryness but not enough to counteract the sweetness, although I'm surprised there is sweetness at all. I mean they are light but you can taste the malt. Rather watery in finish. The sweet-sour flavour of these is getting to me. I want to stop drinking this now. I guessed this to be Grolsch. It was actually Heineken.

Beer D: Dry, biscuity, grainy aroma. It's ironic the Dutch are said to have brought hops to England; there must not have been any left for this beer. Smells like lager-flavoured water, but tastes worse. This is really awful, actively unpleasant. Unfortunately I knew this was Lindeboom because I'd taken it out of the fridge last, so it was colder than the others and hence too easy to guess.

What's the verdict? Well, none of the beers are really to my taste; they're too sweet and I'd find it difficult to drink more than one.

Grolsch is far and away the best of the bunch due to actually having some hop aroma. After the tasting I looked at the bottle and discovered it was brewed and natuurlijk gerijpt in the UK. Oh well.

Heineken is just blah. I last drank Heineken about nine years ago when I was passing through Amsterdam and I remember I wasn't impressed by it then either.

I know now why Bavaria have those girls in orange dresses; it's because they fucking need them to flog their terribly bland beer.

Lindeboom is just awful; I was really disappointed by it as I was hoping it would be more exciting than the macro-brews, but in fact it's much worse.


I hear that the Netherlands have made it to the final and I hope that they get lots and lots of wickets, or whatever it is you do to win at this footy thing. And I hope they get something better than this muck after the game.
Labels: bavaria blind tasting. crappy dutch pils fail grolsch heineken lindeboom tasting notes world cup beer sweepstake