The forgotten stout – is it worth it? 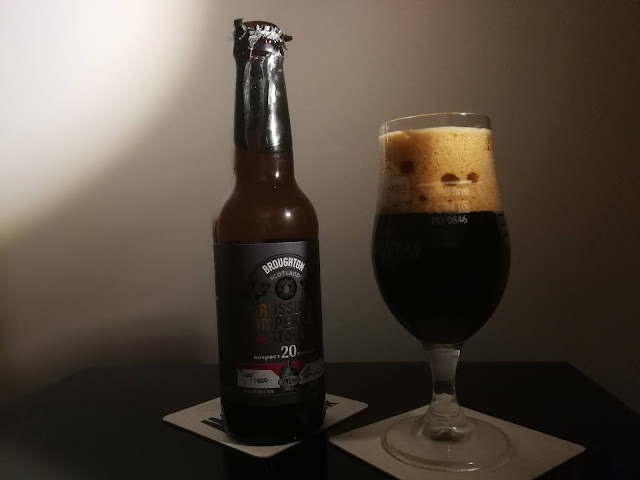 I mentioned in an earlier post that Broughton Brewery, Scotland’s oldest (or second oldest, depending on how you look at it) microbrewery, recently discovered some imperial stout that had been brewed in 2000 for a contract that was never completed, and has been quietly aging in the brewery ever since. This beer has now been bottled and Broughton are offering it to connoisseurs and collectors to raise a bit of money to help them through the pandemic. According to the brewery you’ve only got until the 18th to buy some.

Now, normally when I am offered a bottle of beer that I haven’t tasted for £25, I am sceptical. Of course, some very special beers are worth that, if you have the money. Litre for litre, it is roughly the same price that vintage Courage Russian Stout goes for. (You can read what I thought about that earlier this year here).

But what if it’s shite? That’s the question that lurks in the back of my mind when I gamble on an expensive beer. I suspect I’m not the only one. So I decided to crack one open to help any wavering purchasers make up their minds.

Some day someone drunk is going to seriously injure themselves opening their fifth imperial stout of the evening and sue the brewery, and that will be the end of waxed bottles.

The first whiff when you open the bottle is a startlingly fruity, strawberry-like aroma, which combined with the initial flavours of chocolate ice cream make for an unexpectedly Neapolitan experience.

The word “acidity” on the label made me suspicious. This usually means it went off in the cask and the brewery still bottled and sold it. But the beer isn’t sour, or even tart. It does have a certain maturity to it, yet nonetheless it doesn’t taste like it’s twenty years old. It has a surprisingly light body for its alcoholic content, which makes me think it has dried out quite a bit from how it would have tasted in 2000.

Normally you shouldn’t notice the alcohol in a strong beer. Here, it manifests itself quite pleasantly, with some esteriness, pear skins and grappa notes.

As you drink it the opening chocolate ice cream gives way to a deep wineyness with cocoa, and aromas of tar, liquorice and leather, with treacle toffee and faint aniseed.

So, is this beer worth the money, given that the only way to get it is to contribute £50 to the Broughton Brewery pandemic crowdfunder (which gets you two bottles)?

Well, it’s good, – however, in normal times, I probably wouldn’t pay £25 for it. But these are not normal times. And let’s not get over dramatic – £25 sounds a lot (well it does to me, as I’m a skinflint), but it’s only the price of four pints of Peroni. I know which I’d rather drink.

And while it’s not quite in the same league as Courage Russian Stout, it is very nice, interesting and it is unique. If you have the spare cash and would like to see Broughton survive, you could do worse than get yourself a couple of bottles of this. Personally, I’d love to see them add it to their permanent line-up.