For several years I have talked about making a trip to Dudley to drink dark mild. It started as a joke, but the more I found out about the beer culture of the Black Country the more serious my plans became. I learned that the home of the famous Sarah Hughes Ruby Mild was round there, and also the Swan, in the 1970s one of the four remaining old-time home-brew pubs in England.

Most of all I had heard old CAMRA boys speaking with reverence of a brewery called Batham’s, whose beer was divine nectar. But you can’t get it anywhere else; you have to go to the Black Country for it. I made up my mind to go.

I'm meeting an old friend in the Lamp Tavern in Dudley, because it’s the most central of the pubs we want to visit. And because it’s a Batham’s pub and I want my first drink of the day to be my first taste of these legendary beers. C is already there by the time I arrive; he has a pint of mild in front of him, so I get one too. 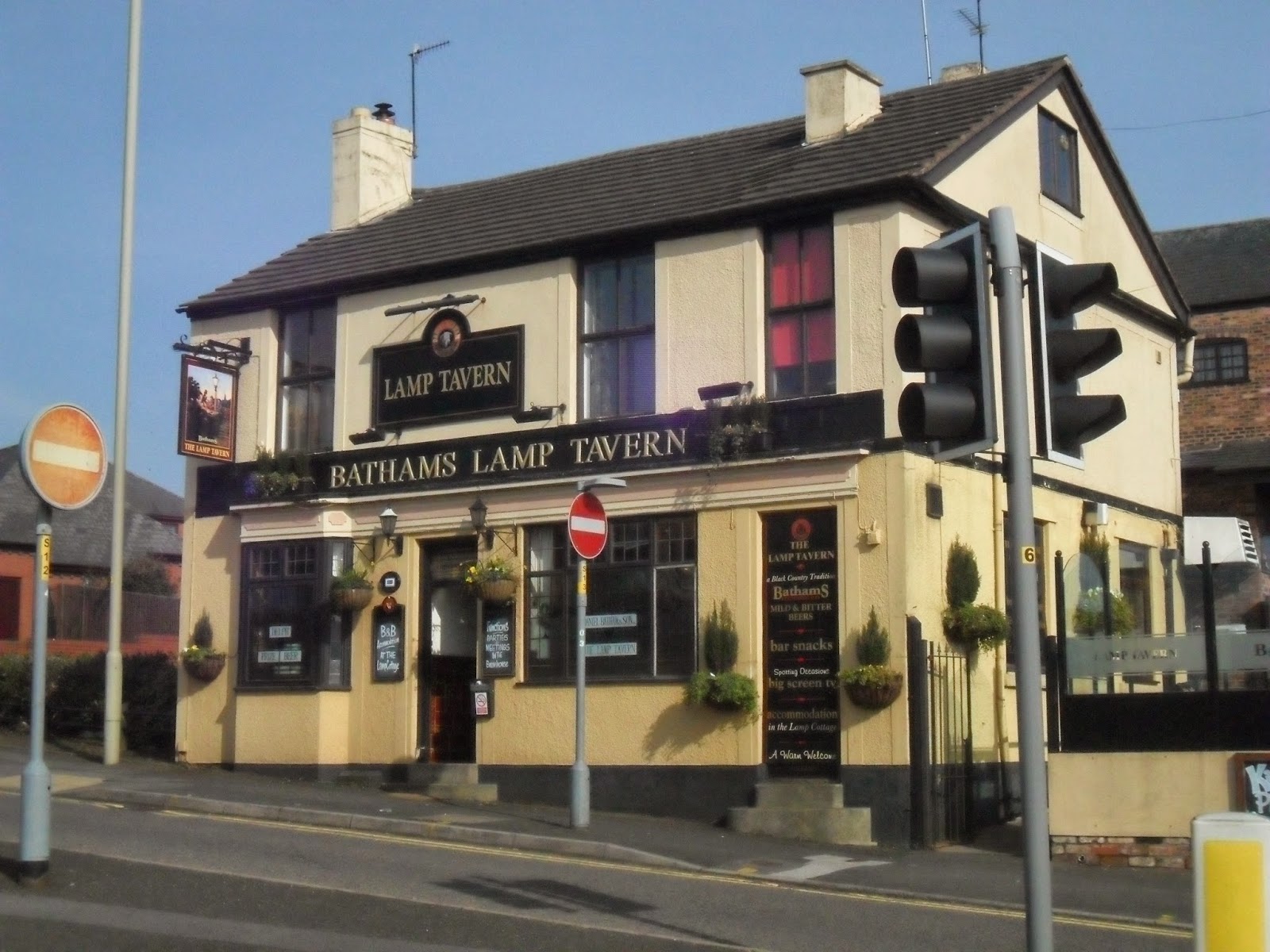 The mild is heavenly. When we switch to the bitter, it’s even better, a golden revelation of a beer, sweet and substantially bitter all at the same time. Very few British beers really taste of malt to me, but this one does. We learn from the barmaid that the Lamp is more a bitter drinkers’ pub … which doesn’t surprise us.

There are a couple of surprises behind the bar too. Bottles of Gold Label (I thought they’d been discontinued years ago), but not brown nip bottles: stubby green bottles like the ones cheap French lager comes in. And the pork scratchings. This part of the world is famous for pork scratchings, of course. But this pub sells four different brands of pork scratchings. That’s taking scratchings seriously.

Our next stop is the geographically nearest: Ma Pardoe’s aka the Swan. Either it’s not as close as it looks on the map, or we get lost on the way.

Never mind. We pile in to the parlour bar, see no pumpclips, so head through to the back to see what’s on. Ah. No pump clips here either. They don’t use them – the available beers are just chalked up on a blackboard. There’s a surprise for me here too: on ordering two pints of mild, I am immediately asked “light or dark?” We go for the dark, which is delicious. After circumnavigating the warren of interconnecting rooms, we end up in the beautiful red front bar and have a pint of the pale mild. Which is also delicious. There’s also “Entire”, another slighty stronger amber beer, not a porter as you might expect, and Old Bumblehole (arf, arf, etc.).

The Swan is a wonderful pub. There are great pubs in nearly every city, but very few of them have the magic of this place. It’s this magic that reminds me of Franconia. Old, wood-paneled, multi-roomed taverns, brewers who carry on doing things as they always have, not paying much attention to what trends are moving in the metropoles, and all this in a region foolishly regarded as a backwater by people elsewhere. And yet these pubs are completely embedded in the local community and couldn’t exist anywhere else in the same form. I’m even starting to like the local accent, which is much pleasanter to listen to than the malicious caricature of it you sometimes hear on television.

With some reluctance we leave the Swan, and the reason is that we are trying to get to the Bull and Bladder in Brierley Hill before it gets dark. 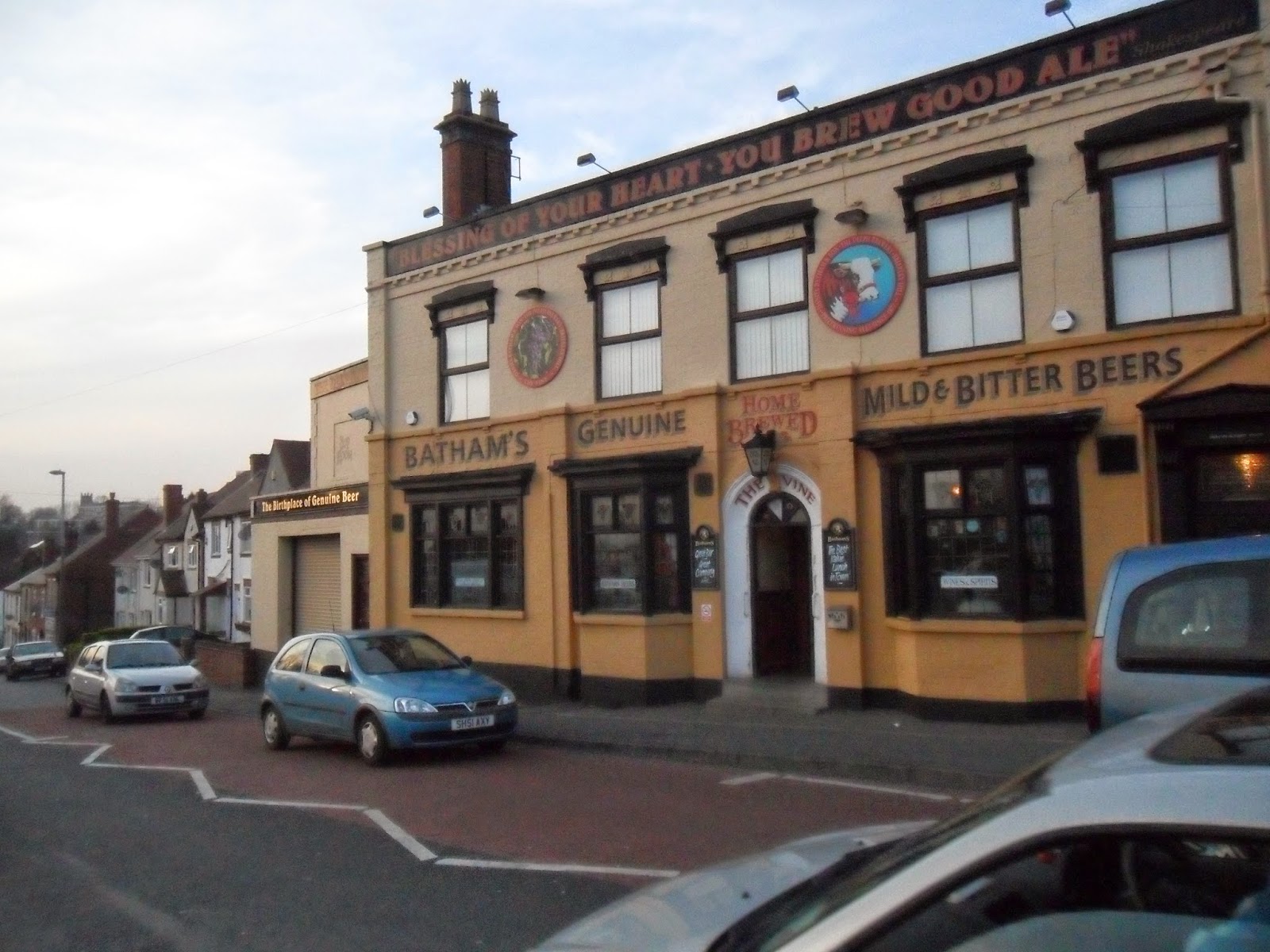 This pub, also called the Vine, is regarded as Batham’s brewery tap. Again, there are multiple rooms and the pint-pulling is done by two silver-haired matrons. More Batham’s Bitter is drunk here. Not just by us, by everyone. It seems that almost everyone in the pub, including most of the women, has a pint of the golden beer in front of them. You can definitely see how the brewery survives with only a few tied pubs. 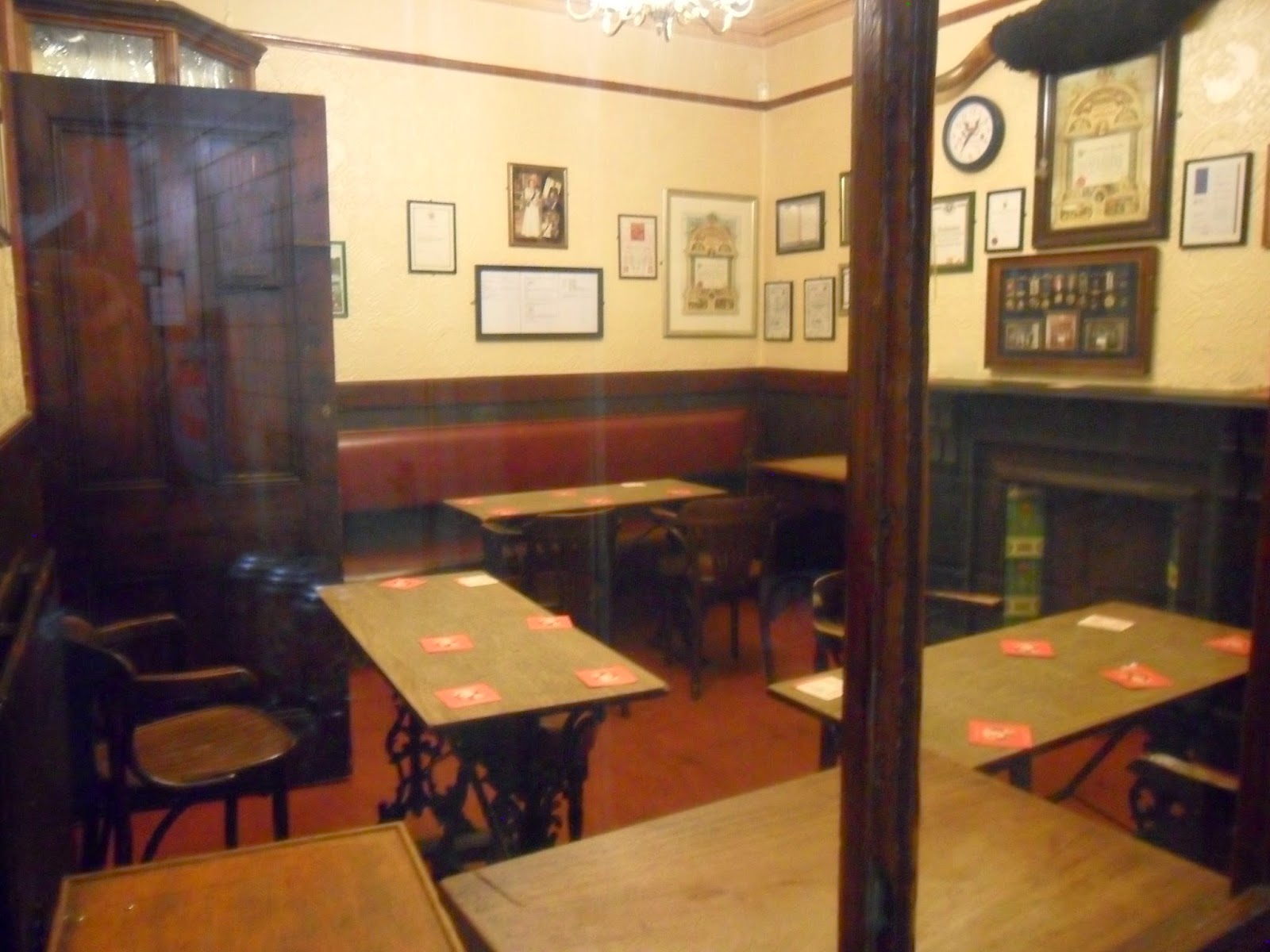 There is one more pub we want to see with some urgency: The Britannia. The peculiar feature of this pub is that it has a room with no bar counter at all, just a set of beer engines mounted by the door. That room is only opened on Saturdays, so this is our only chance to see it. By the time we arrive the pub is bouncing and there’s no chance of getting a seat in the holy room, but we get to stand in the doorway at least. 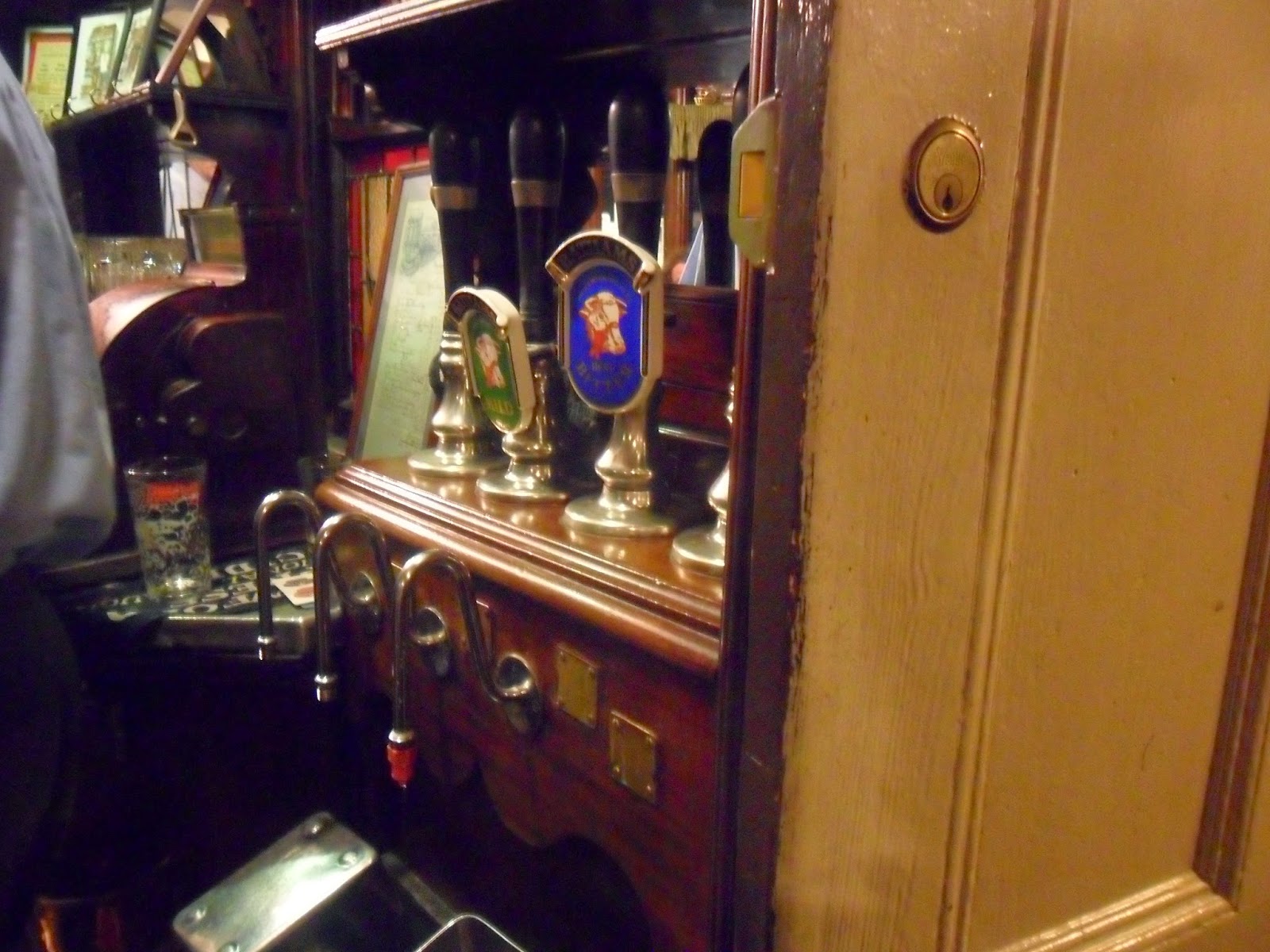 When planning this trip I thought that four pubs in a day wasn’t very much, but it was more than enough; I could happily have spent all evening in any of them. There is one pub I had been hoping to visit that we couldn’t have gone to even if we’d had time: The Shakespeare, recorded in CAMRA’s National Inventory and detailed in issue three of the wonderful Doghouse magazine. But just a few days before the trip I learn that it closed back in September last year.

We make it back to the Lamp in time for a last pint of Bitter – about three minutes before last orders in fact.

The next morning there is some culture in store. Well, the pubs don’t open until twelve and you have to fill the morning somehow. The Black Country Living Museum is a splendid collection of old buildings, painstakingly dismantled and reconstructed on this site to form pseudo-original streets. There are various shops, a trade union hall where we get a decent breakfast, a working fish and chip shop, trams and trolleybuses – and a pub.

The pub is the Bottle and Glass which once stood in nearby Brockmore. It’s pretty much exactly as it was fifty or a hundred years ago. It’s wonderful to sit in one of the sparse little rooms next to the coal fire. Even better is the knowledge that there are still pubs like this out in the wild round here.

The Bottle & Glass does still serve beer, but as they pour it in plastic cups, which kind of ruins the experience, staying for a pint here is not a must-do.

(These niggles aside, it’s a far better reconstruction than the terrible mess Glasgow has made of the pub exhibit in the Riverside Museum. That is nothing like the interior of the old Mitre Bar that it claims to be, and the whole thing seems intended to remind people of the evils of drink more than anything else. As for being able to get a pint there, even in a plastic cup, forget it.)

It’s easy to spend hours at the museum and still only scratch the surface, so by the time we leave it’s well past opening time and I’m starting to fancy a refreshing glass of beer. I know where, too – the Beacon Hotel in Sedgley. We have saved this pub till last, as it’s the home of the potentially dangerous 6% Sarah Hughes mild.

Once again I have misjudged the distance, and we waste valuable drinking time walking to Sedgley. It’s only around three miles, but in the sunshine in our hungover state it feels like ten. I don’t recommend it; the walk is neither pleasant nor useful.

On the way we unexpectedly pass the Holdens brewery, but don’t have time to stop, because it’s Sunday and afternoon closing is still sacrosanct here. We are in danger of not reaching the Beacon in time at all. But we get there, and at eighteen minutes to three are standing on the other side of the road. Walking for miles in the scorching sun has a slight tendency to make you thirsty: five minutes later I am queueing at the serving hatch for my second pint. The beer that slides down so fast is Amber; despite the name it is golden in colour. Thanks to the Amber taking the edge off our perishing thirsts, and to the generous drinking-up time the pub allows, we are able to treat the following pint of Ruby Mild with the respect it deserves.


The magically restorative power of the Mild means that after just the 45 precious minutes in the pub we are relaxed and refreshed again and able to jump on the convenient next bus to Wolverhampton for the train home.

I was expecting to be disappointed in this trip and have my romantic illusions destroyed. Instead I found a real living beer culture, both surprising and endearing. OK, central Dudley is a bit run-down, but the pubs are magical and the beer is even better. I can’t wait to go back.
Labels: bathams beacon hotel black country black country living museum brierley hill britannia dark mild dudley ma pardoes pork scratchings sarah hughes sedgeley
Location: Dudley, West Midlands, UK