Complacency and “craft” in Munich 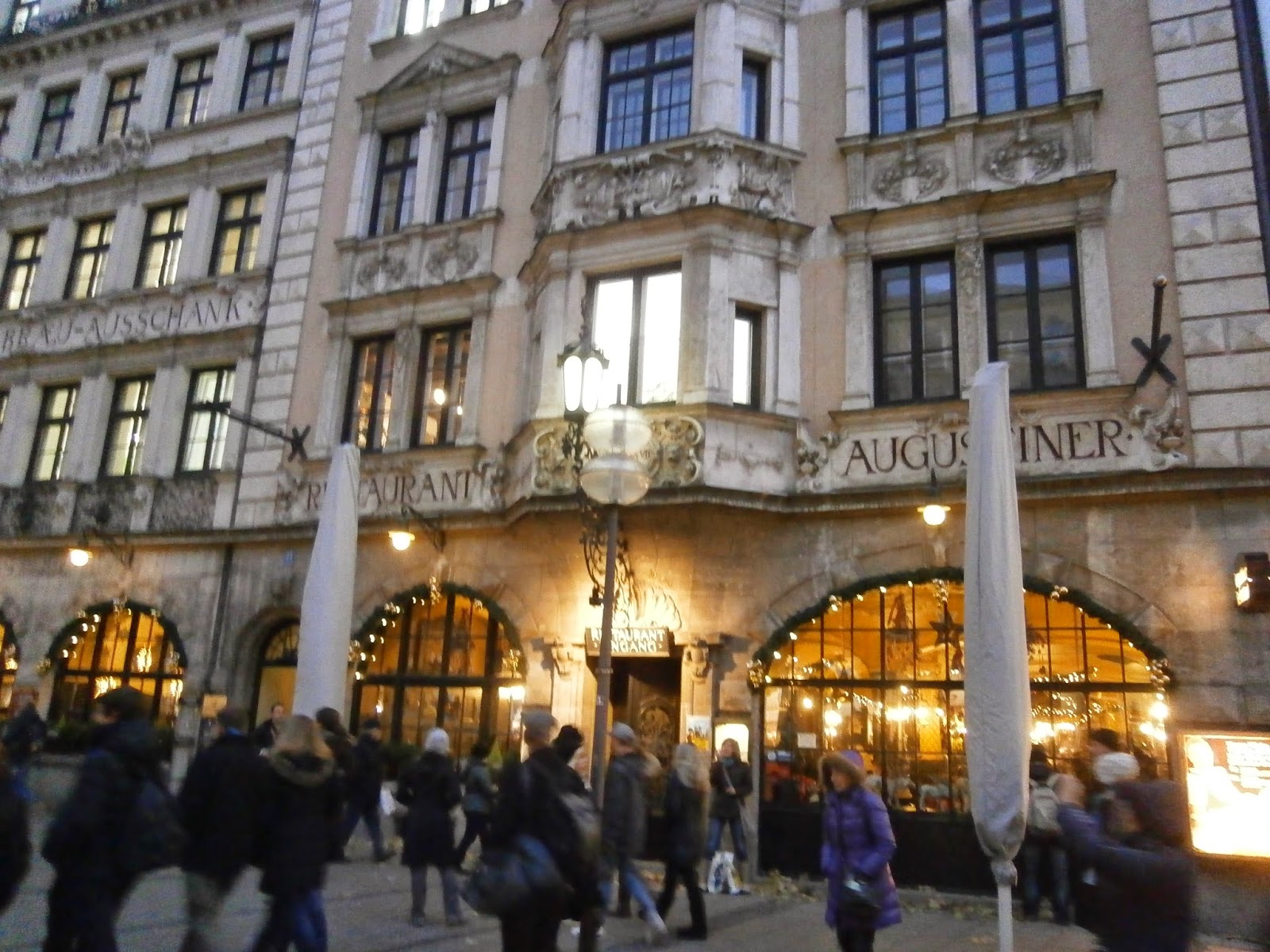 The difference between Franconia and Munich is a bit like that between Yorkshire and London. The chic inhabitants of the wealthy, high-powered metropolis pity the backward towns and villages out in the sticks. The provincials, for their part, wouldn’t swap in a million years and think the residents of the capital must be soft in t’head to pay such extortionate prices for beer.

Our first stop is a place I’ve wanted to visit for absolutely ages, but never got around to – Augustiner’s beer hall at Marienplatz. Augustiner is generally the most highly regarded of Munich’s big six. In addition, it’s a Saturday shortly before Christmas, and the beer hall is bang slap in the middle of the main shopping street. That means it’s packed, but somehow we manage to squeeze in at the end of a table. 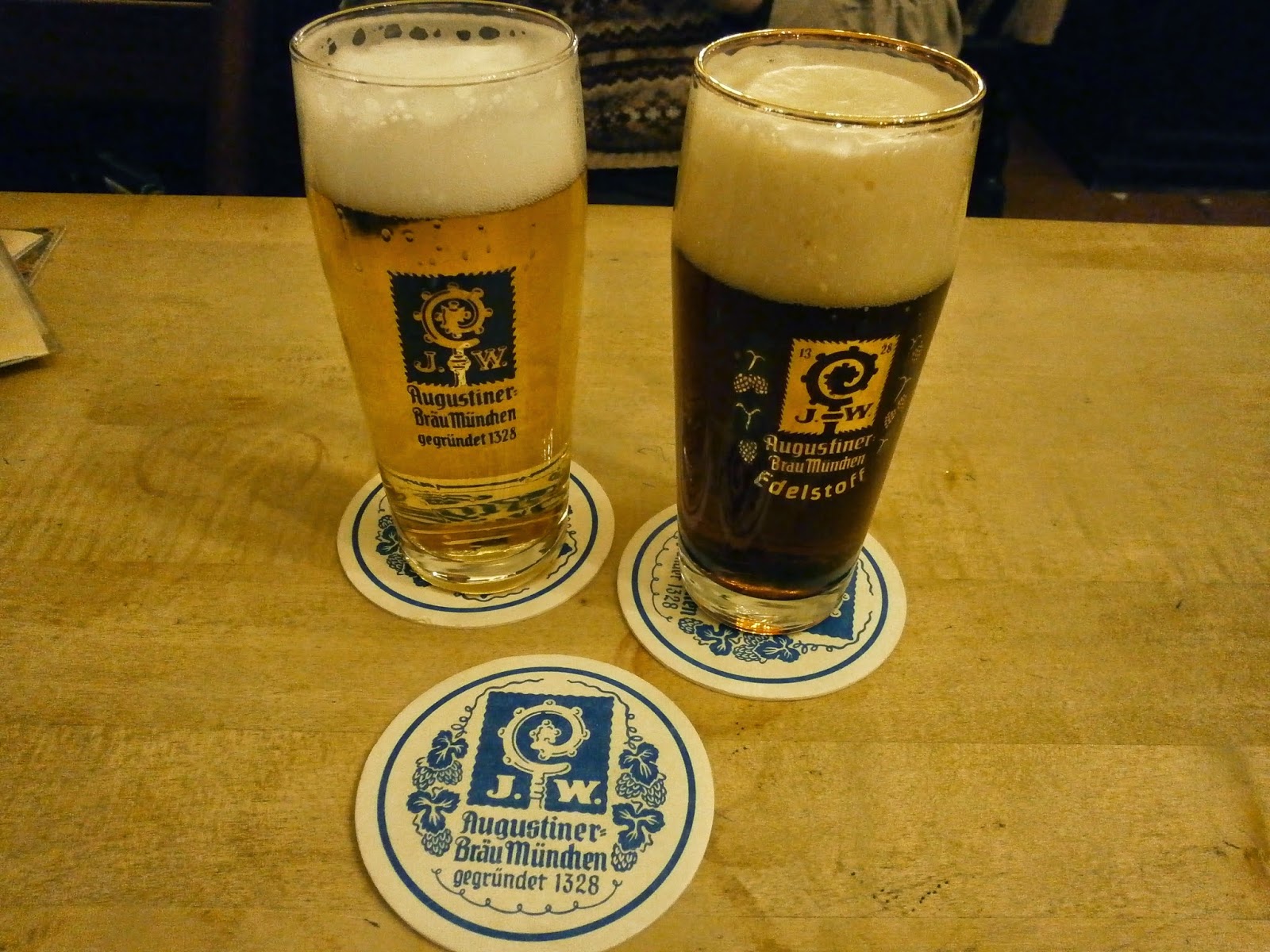 It’s slightly disappointing to see that the default measure is no longer a litre – almost everyone we see has a half-litre glass in front of them. Oh well – one Helles and one Dunkles, bitte.

The Helles is clean, fresh, and … meh. There’s a good beer here somewhere but it’s been filtered to death, so there is sweet pilsner malt and not much else. The Dunkel is a bit better, medium-bodied with toasty dark malt notes, reminiscent of roast chestnuts and finishing dry and woody, but the glass is short-poured. I get the impression the beer hall has been resting on its laurels for a very long time. Oh well. In the past I’ve found the beers of the six remaining big Munich brands much poorer than their reputation suggests, but nonetheless it’s disappointing to have it confirmed on its home turf, where it ought to be excellent. 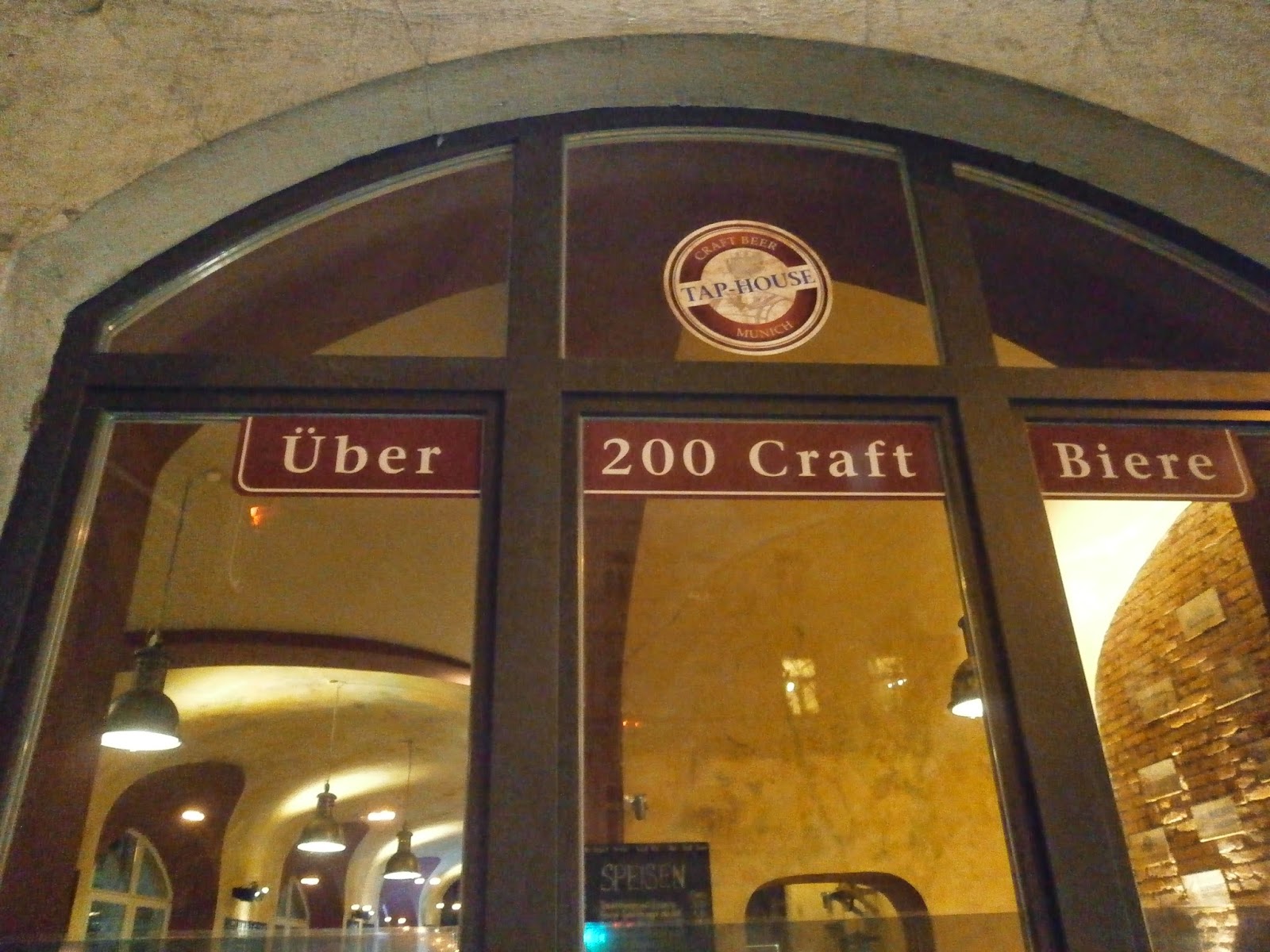 Since I last visited Germany a new wave of breweries has started to emerge, which are not content to compete with others just on the quality of their Pilsner or Helles. They are influenced by trends from abroad and chafe at the often staid conservatism of German brewing. This sets them apart from the previous wave of small brewpubs which were, if anything, more conservative than their bigger colleagues.

In principle this is a very good thing. The insistence of German “craft beer” fanatics in trying to force it into a template that was devised in another country and makes no sense here is, on the other hand, quite embarrassing. Well, the post-war trend to ape whatever is popular in America has always seemed to me to be a bit stronger in Germany than anywhere else.

After years of me wondering where all the German beer websites were, suddenly there are “craft beer” blogs, gleefully declaring that some burger joint that sells a few bottles of Brooklyn Lager is “the best bar in Munich”, and the German press is as full of stupid and ignorant “craft beer” articles as the British.

The new breweries are a refreshing innovation and it’s a shame that so many of them – and even more so the people writing about beer – are floundering about in the straitjacket of a divisive, exclusionary ideology.

Even sadder, the irreplaceable family breweries of Bavaria continue to close down while “craft beer” types try to market undistinguished copies of Sierra Nevada Pale Ale. 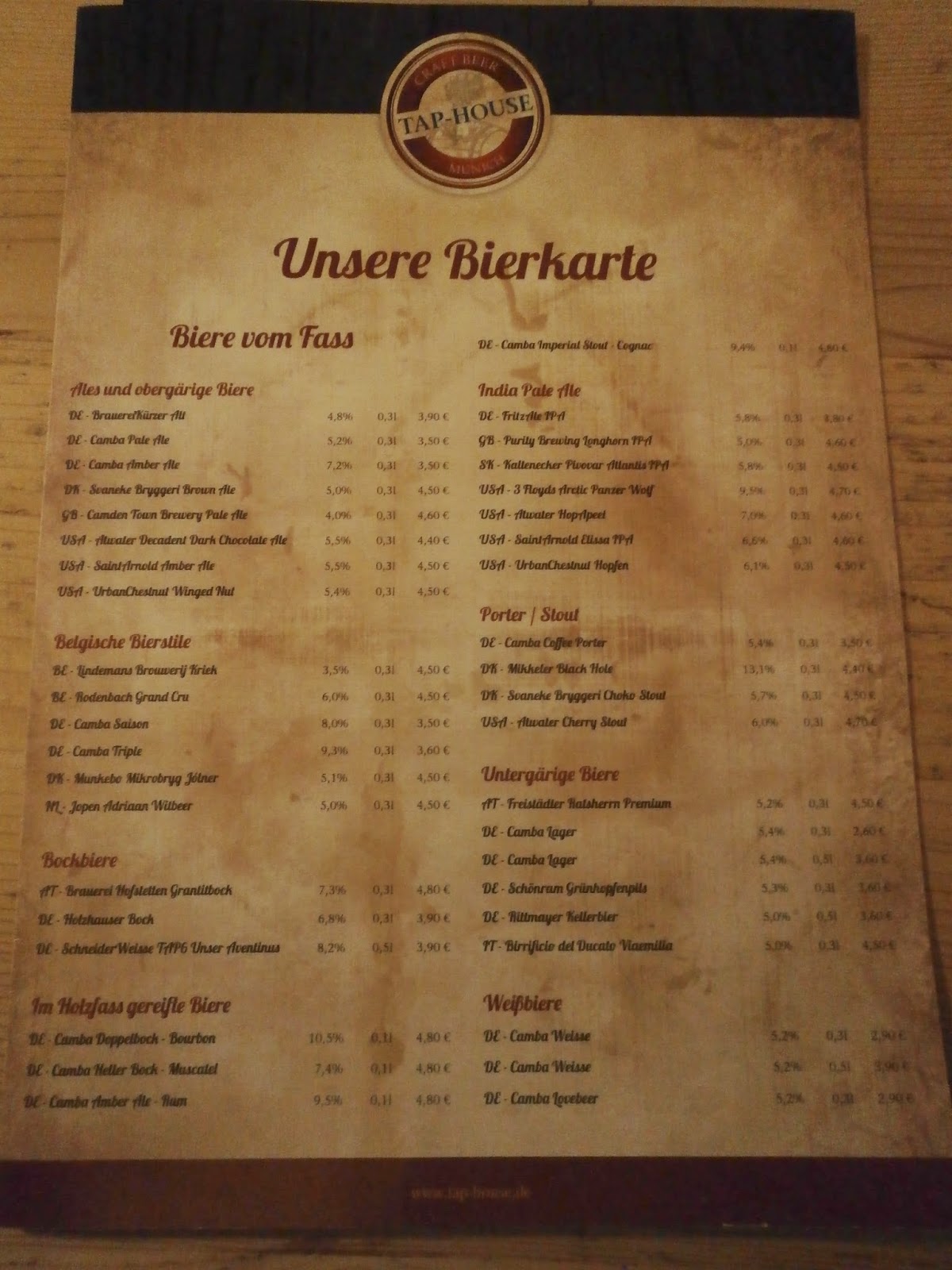 Camba Bavaria is a brewery based in Truchtlachingen in south-east Bavaria. It was set up by brewery equipment manufacturer Braukon less than ten years ago and the brewery seems – rather like Weyermann’s brewing operation – intended as much to showcase the versatility of the company’s other products as to turn a profit in its own right.

Camba has recently dared to open what they call a “Tap-House” (being suitably fashionable, the name just has to be in English, cringe) in Munich. The novelty of this operation is that there is a huge range of beer available on tap, something new in Germany, where the overwhelming majority of bars (and beer festivals, for that matter) serve only one or two draught beers. It had only just opened, and it was on the way to our hotel, so why not?

The interior of the bar makes me think it was an Italian or Greek restaurant until fairly recently. We have to cringe again on seeing the words “Can you feel the HOPS” chalked on the wall in English. Most of the customers appear to be American immigrants. The only nod to local traditions are the bar snacks – Obatzda, a mixture of Camembert and butter seasoned with paprika, served with a pretzel.

FritzAle is one of the “craft” brewers. On tap, the IPA is hoppy, brown, sweet and one-dimensional, like a hundred other American IPAs.

Moving on, I have a very nice green-hopped pils from Schönramer. Head brewer Eric Toft of Schönramer has been making very good beers in a village in eastern Bavaria for the best part of 15 years, and the brewery has been there for over a hundred. Yet somehow he is regarded as part of a “craft beer revolution” which is purported to be a new thing. I’m ignoring all this nonsense and just enjoying his beautiful pilsner: a magnificent beer with delicious herbal aromas, sweet malt and medium bitterness that disappears far too soon.

It’s time to move on. 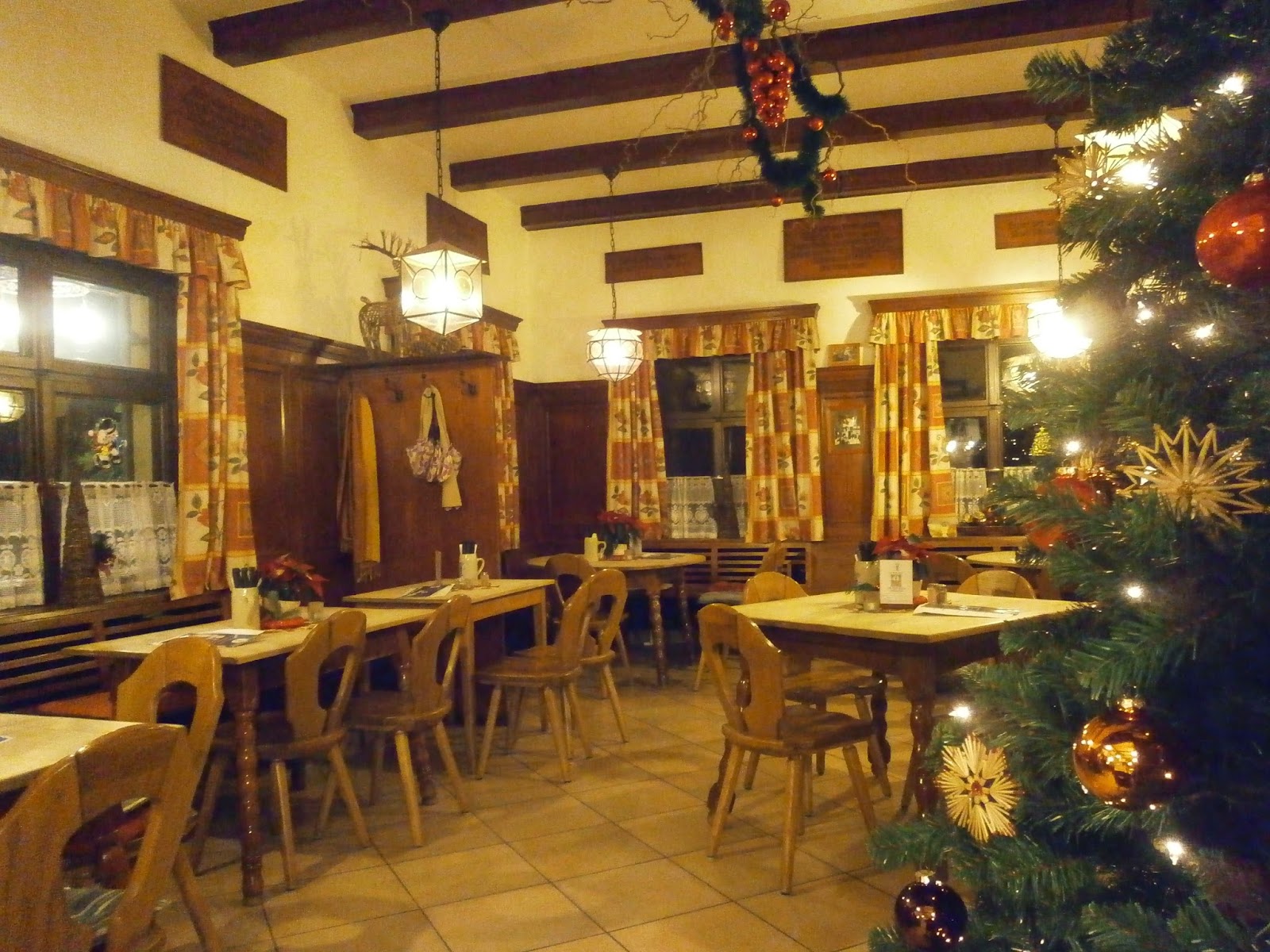 One old-fashioned brewery in no danger of closing down is the Forschungsbrauerei in Perlach in the south-east of Munich, where no-one, thank God, has ever heard of “craft beer”. It’s recently been taken over by new owners after the previous occupiers wanted to give up. It still looks pretty much the same as the last time I was here twenty years ago, but they are brewing a slightly wider range of beers nowadays (four instead of two).

It’s shocking to discover that even here the Masskrug has lost ground to the 0.5L vessel.
St. Jakobus is the blonde bock beer and the house speciality. Rich aroma, sticky malt, chewy, it’s one of the most ridiculously moreish beers I’ve tried. I can’t quite explain what makes it so good – oddly, this is often what happens when I encounter a really top-notch beer. Pears, bacon, fudge, tree sap, freshly baked cakes, eggs, so many flavours in the one mug.

Pilsissimus, despite the name, is regarded by the brewery as an export-type beer, not a Pilsner. It’s sweetish but does have a sneaky bitterness that sneaks up on you.

Both beers demand further study, but there is no time, it’s closing time. 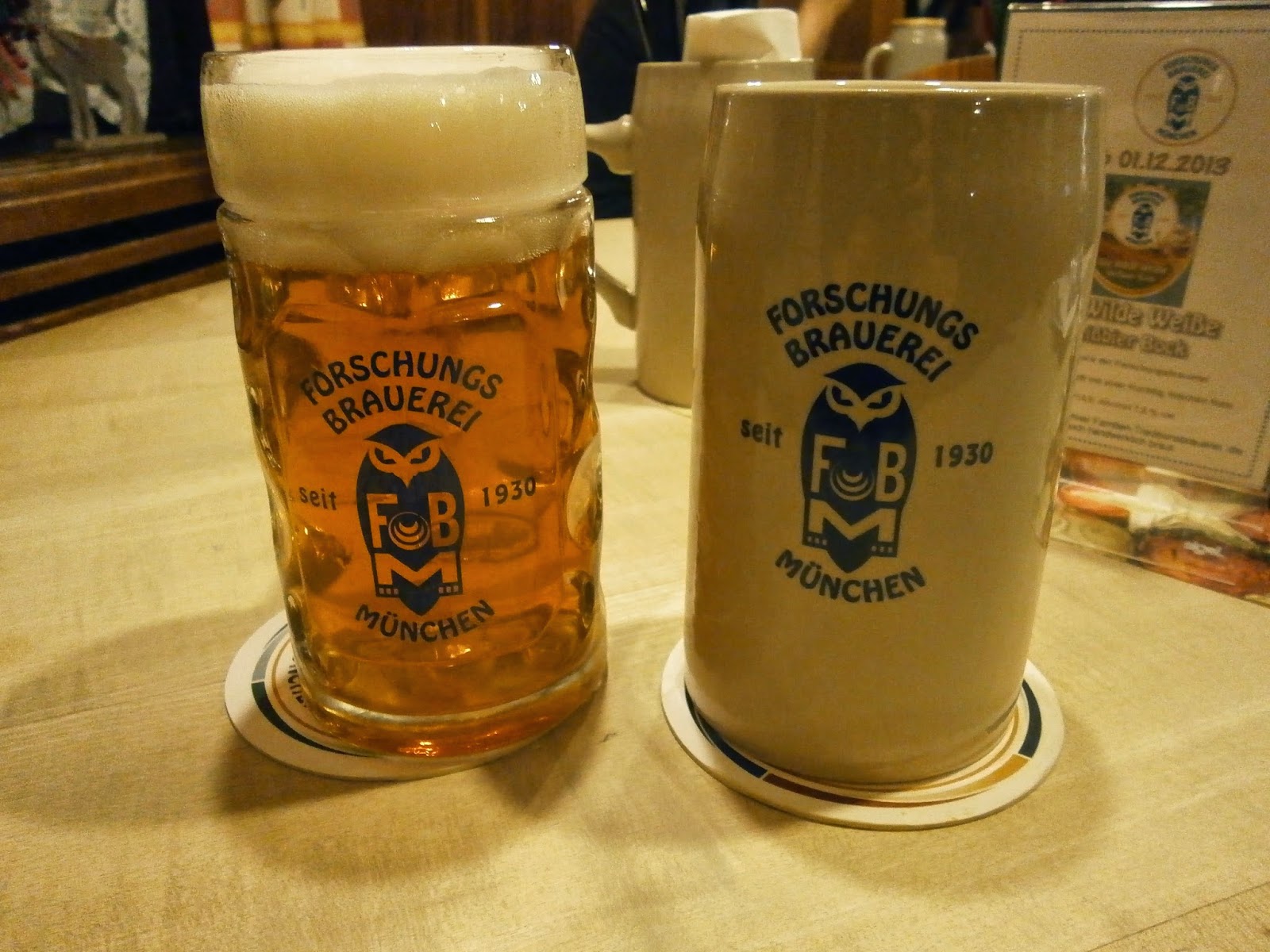 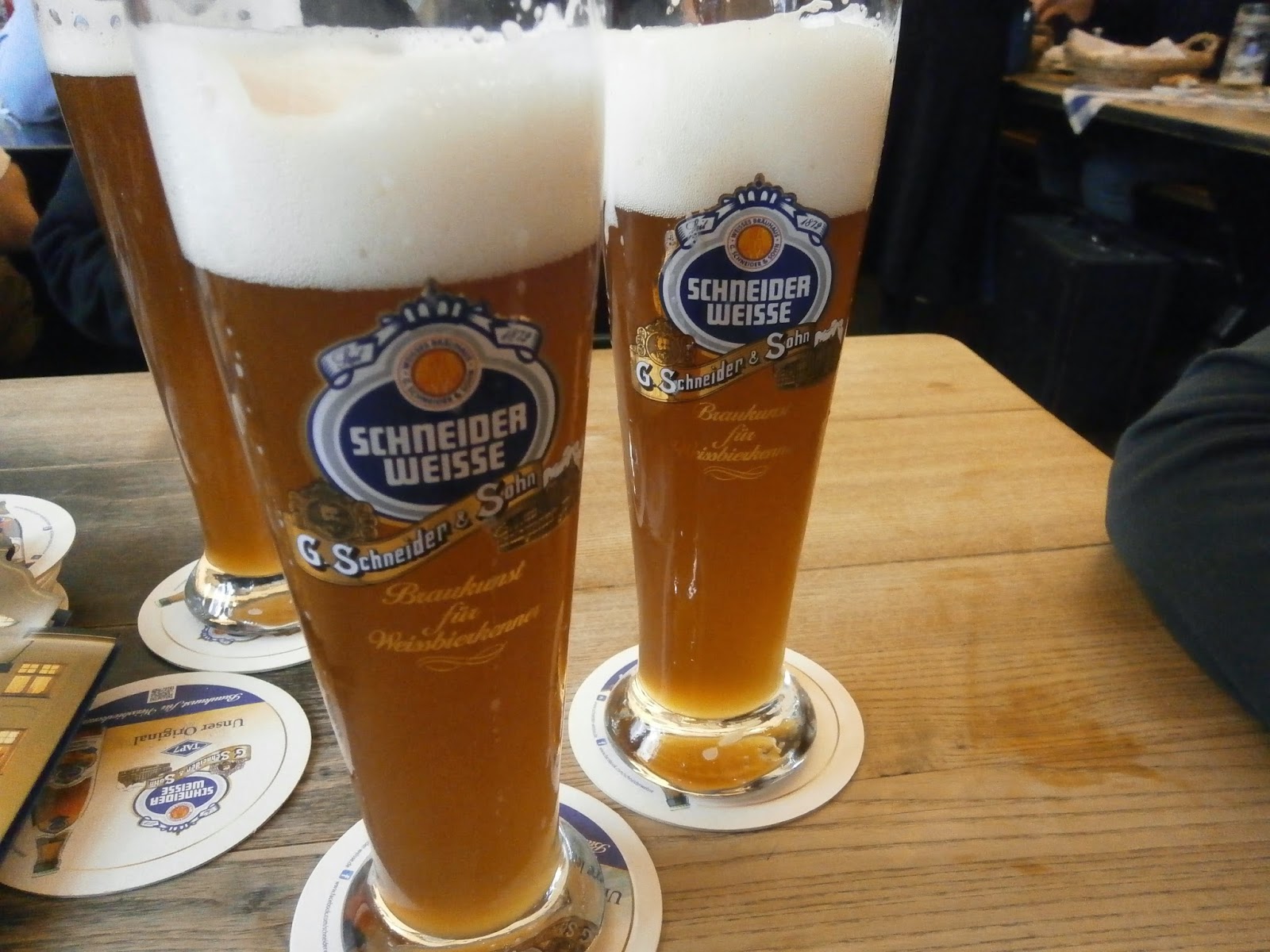 The next morning there is just time for breakfast before heading to the airport. As we are in Munich, and on holiday, not just any old breakfast – a Weisswurstfrühstück, or “white sausage breakfast.” This consists of a soft Bavarian pretzel and a pair of poached herbed veal sausages. These can be quite intimidating to the novice, floating in hot water in a soup tureen and encased in a tough skin which you can either eat or leave.

I love them and the best place I could think of to have them was at the Schneider brewery tap in the centre of town. Purists say you are supposed to consume them strictly before noon, and fortunately we are just in time. It’s already bustling, and not just with the type of people you might expect to see in a pub mid-morning in Britain. Whole families and grannies are here. There is a group of musicians in lederhosen just opposite us, and every so often they play a tune. I’m not quite sure if they are being paid to be here, or if they are just an amateur band on a Sunday outing.

You do, of course, wash the Weisswurst down with a beer. The Schneider Weisse tastes just the same here as it does in Scotland, which is not something you can say for all German beers.

Disaster strikes on the way to the Flughafen. We spend just a little too long marvelling at the displays of sausages in the Viktualienmarkt and miss the S-Bahn to the airport. Normally this wouldn’t be a problem, but the next S-Bahn is cancelled. We are now running late and miss the bag drop. But the flight itself is delayed by several hours, so the check-in people let us check in our bags anyway.

The delay would be a blessing in disguise if we were still land-side, because Munich Airport has its very own brewpub, Airbräu. I remembered the Pils being pretty good. But we are stuck airside and have nothing to do but sit around the one snack bar in the departure lounge. But there is beer. So, unexpectedly, my last beer in Germany is a König-Pilsener. This is one of the “TV-Beers” that “craft beer” snobs look down their noses at. Yet although it’s no Schönramer, it’s a decent beer with respectable bitterness. If only the beer was this “bad” in other airports I’ve travelled through.
Labels: augustiner grossgaststätte camba bavaria forschungsbrauerei german beer germany könig-pils münchen munich schneider weisse tap-house