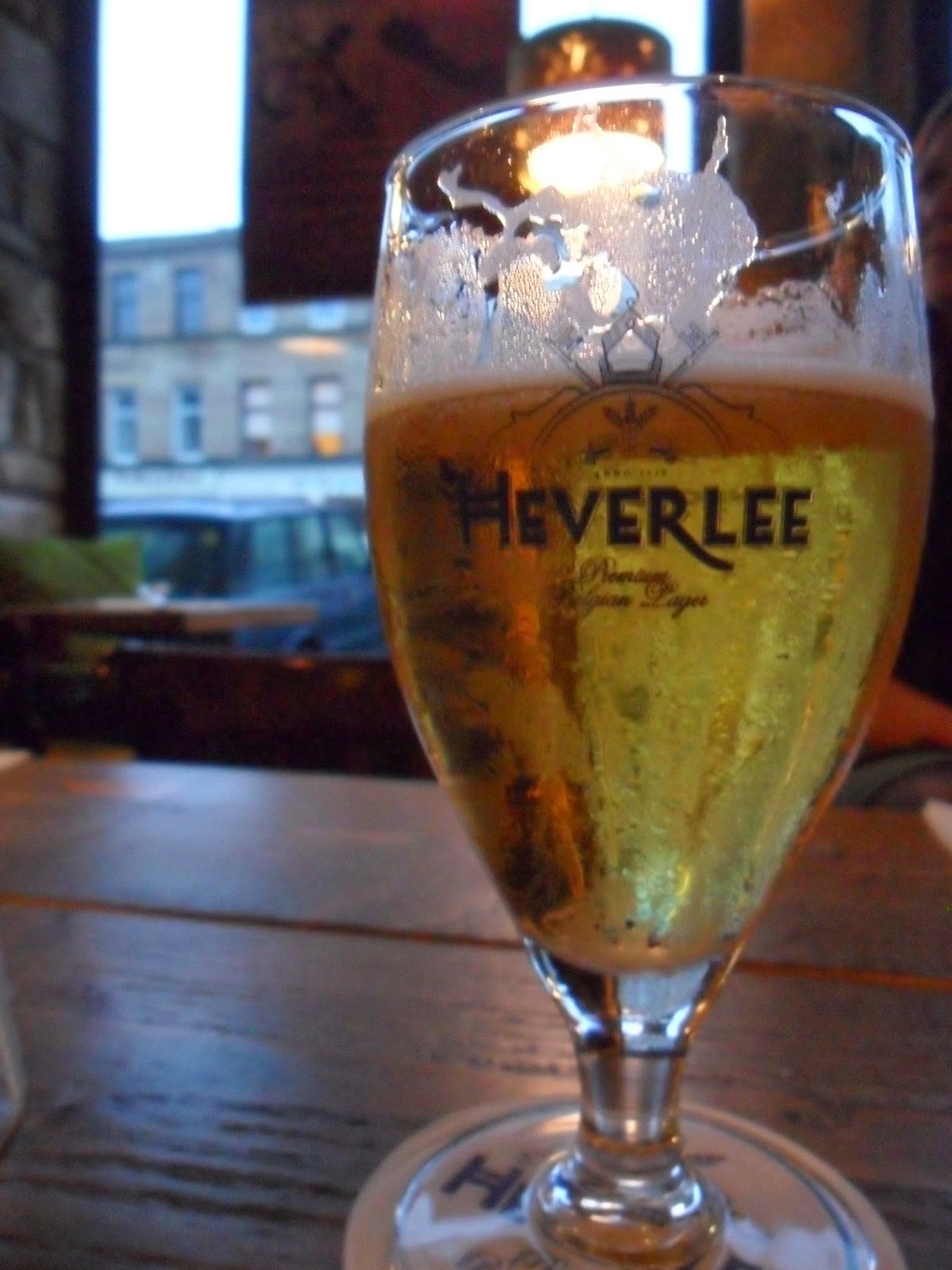 A while ago – months ago, in fact – I was invited with some other bloggers to come and taste a few Belgian beers with Joris Brams, who is billed as “a Belgian brewer” and the creator of the new Heverlee lager which has been quietly appearing on the bars of Glasgow for the last few months.

The invitation, oddly, forgot to mention that Joris is not just any old brewer, but sits on the board of C&C, the parent company of Tennent’s and Magners, who are rolling out Heverlee in the on-trade in Scotland.

Joris talked us through a selection of Belgian beers. We enjoyed Duvel, McChouffe, DeKoninck, Bourgogne des Flandres, and most interesting for me, Mort Subite – not the usual sweetened gueuze that brand is known for, but the traditional Oude Gueuze which was really rather nice.

Then it’s on to the Heverlee.

I had a slight cold so can make only very general comments on the flavour. It was, surprisingly, satisfyingly bitter with a creamy mouthfeel. Sweetness is a nice contrast to the bitterness, but it’s a corny sweetness rather than a malty one (the grist is 20% maize), so you have to drink it fast – come back to it when it’s warmed up and it’s less pleasant.

According to C&C, Heverlee is a heritage beer “based on” historical recipes once used by the monks at the Park Abbey, in Heverlee, Belgium.

It’s quite amazing then that the result is precisely what you would get if you set out to come up with a product to compete against Stella Artois.


The beer is brewed for C&C by Martens Brewery in Bocholt from 80% pils malt and 20% maize. It is bittered with Hallertau to 21 units of bitterness, and Saaz hops for aroma. It’s fermented at 15C and lagered for two weeks.

To give the Heverlee beer a fair chance, I tried it again a week or so later – in a straight fight against Stella Artois,  I found Heverlee softer and chewier, with a tad more bitterness, but the difference is not large. (If you would like to repeat this challenge, it’s handy to know that Alfredo’s bar in West Nile St sells Stella, while the Iron Horse on the other side of the road sells Heverlee.)

There is a school of thought that maintains Stella Artois was once much better than it is now. I myself am not convinced it was ever great, but if you do believe that it was, creating a new product, with the character and quality that its rival once had, seems to me a perfectly respectable strategy, and, in my view, laudable. It is a positive thing for breweries to put more flavour into their beer, rather than taking it out.

Why the PR people have then decided to dress the story up with extraneous and more than dubious historical decoration is beyond me. We learn that the monks of Heverlee developed light lager in the sixteenth century, and it was so popular in nearby Leuven that the brewers’ guild forced them to close down their brewery.

This is a spectacular historical discovery, meaning that Belgian monasteries were on a level with the Bavarians in developing lager beer and several centuries in advance of Josef Groll at Pilsner Urquell with a pale one. Sadly, I think we will be waiting for documentation of these claims for quite some time yet.

The dodgy claims in the press release then turn into the ridiculous headline in The Scotsman, “Medieval Belgian beer on sale in Scotland”, which shows the dangers of spreading misleading stories to clueless journalists. 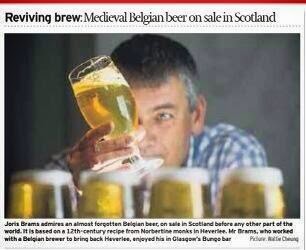 In reality Heverlee cannot be anything more than – at the most – “inspired” by the beer which was once brewed at the abbey, given that it is a modern beer, made with a pure yeast culture and filtered to be bar bright, then dispensed from a keg.

It was very nice of Joris to take time to meet a handful of bloggers and bring us some beers to taste. I never imagined I’d find myself listening to someone from C&C explaining the production process of traditional gueuze, and the thought that people on the board of that company are familiar with Orval and Rodenbach is very positive.

But I can’t help feeling that if C&C are serious about the authenticity in beer that Joris talks about, they need to let him tell the story and stop the marketing people padding it out with ahistorical nonsense.
Labels: belgian lager c&c heverlee monks stella artois tennents
Location: Glasgow, Glasgow City, UK