A week after the Paisley Beer Festival I still wake up dreaming that I’m pouring pints.

On Friday it’s pandemonium on the Foreign Bar. There’s a constant stream of punters asking for fruit beers. Most of our draught beers are Dutch and Belgian blondes and proper lager from Germany, along with the dedicated Czech Bernard fonts. But there are a few kegs of Boon Kriek. On Friday night we put one of those on. It’s gone in twenty-five minutes. Worse than that, it causes absolute gridlock because all the staff are now queueing to pour kriek instead of serving customers. In the queue we’re brainstorming how to handle this better next year.

The punters mostly want wheat and fruit beers. Some are very knowledgeable indeed and ask for the serious lambics, Hanssens and Girardin. Others just want something fruity. Girardin is the only frambozen we have and it sells out very fast indeed. We had some plain gueuze and strawberry gueuze from Hanssens, but they disappeared so quickly that I’m not sure any more that I ever saw them to begin with. 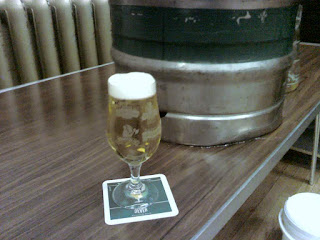 When I tweet that we have St Georgen Kellerbier I get replies from people who live in Franconia which can be paraphrased as “meh”. It’s nice, caramelly, malty, a bit appley. The second keg is better than the first. It’s not as good as I remember it being in Franconia, but anyone saying it’s Industriebier is just spoilt. Pah!

I rather enjoy the draught Jever Pils. Nicely bitter with a touch of malt, verging on sweet ripe grassiness. I would say vegetal, but not in a cooked-cabbage or sweetcorn sort of way, more like chewing a stalk of grass – barley is a kind of grass, after all, and the very light kilning of pilsner malt allows that freshness to come through.

Oddly, the best bottled German beers are the slowest sellers. Hours after the last of the Kapuziner is gone we still have loads of Schlenkerla, Mühlen Kölsch and Andechser Bock. I start pushing the Schlenkerla. Anyone coming to the bar who doesn’t know exactly what they want, I ask them if they like bacon. It works, because Schlenkerla is the best damn beer in the fucking world and the punters all love it. Or, at least, nobody complains.

Then disaster strikes. We have a special keg in the storeroom that we weren’t supposed to get in the first place. It was a substitute for something that we’d ordered that hadn’t arrived. We don’t have a coupler that fits the keg. It’s not the sort of thing you can borrow from a friendly pub, either, even if they had the correct one. The keg goes back into the fridge. I’m not even going to divulge the name of the beer involved because the howls of anguish will hurt my ears.


When I arrive on Saturday, the choice for the punters has been simplified still more. Our job is mostly telling people: “No, we have no fruit beer left. We have the two German lagers and the three Czech lagers, and the two bottles you see in the fridge.” It’s the first time the Foreign Bar has been quiet. I’ve hardly had a chance to have a drink myself for the last couple of nights and am pretty sure I’ve drunk less cask ale during this festival than in a normal week!

I move over to the English bar. Two coopers from Theakstons are helping out pulling beers. I ask my nerdy questions about the wooden casks. They confirm the casks are newly made, explaining the oaky taste of the dark mild. And I am surprised to learn that they only rarely have to destroy a cask that’s got irredeemably infected inside. That comes from knowing what you’re doing, I suppose.

On Sunday is the clear-up. All the bars have to be dismantled and removed, and all the casks rolled out; the half-full ones go back as ullage to the breweries. I’m surprised at some of the beer that’s remained undrunk – punters don’t know what’s good.

We load the still full Special Untappable Substitute Beer onto a pallet, sadly, with the other empty kegs going back to the Continent; nothing is said, but we are all secretly resolving to make sure that the proper fitting is obtained in time for next year. (Sob.)