In a move which caught me (and not a few other people) by surprise, Wells & Youngs the other day announced they had purchased the venerable Edinburgh beer brands McEwan’s and William Younger from Heineken.

Heineken has not really known what to do with these brands since they acquired them along with Foster’s and Kronenbourg, the business they were really interested in. The marketing of them was farmed out to a third party in the hope that there was still some mileage in what were clearly seen as declining legacy brands whose customers were dying out. 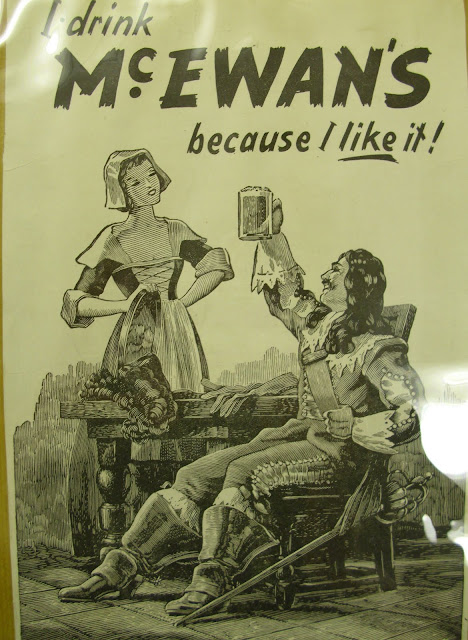 If the price was right, the move makes sense. Though tired and battered from decades of neglect, these are still strong brands up here, whereas Wells & Youngs’ existing brands Youngs, Wells and Courage are marginal at best. Wells Bombardier, with its flag of St George pump clip, doesn’t sell well in Scotland for some reason. Kegged and packaged McEwan’s beers (Younger’s somewhat less so) are still a substantial, though declining, business, but the clue to W&Y’s intentions is in the announcement that they intend to bring back cask to the brands. 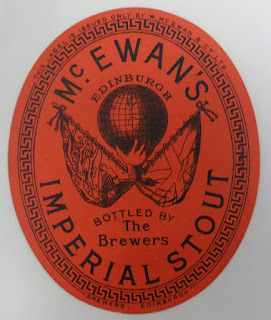 “We want to bring McEwan’s back on cask. We also believe we can offer a wider range of McEwan’s in bottle,” Nigel McNally of Wells & Youngs told The Herald. “We also feel there is a really significant opportunity in export.”

He is right on the latter point. American beer nerds are already clamouring for the return of McEwan’s Scotch Ale. And, although it’s not an option I favour because it’s fundamentally dishonest, speciality beers could be pushed onto the American market under the McEwan’s or Younger’s names, in the same way that Newcastle-branded beers have been launched there that don’t exist in the UK. McEwan’s Heather Ale?

As the Cask Report shows, Scotland is experiencing rapid growth in the cask sector (albeit up from almost nothing), so it’s logical for a southern-based brewer to want a piece of the market here.

Now the question is: who is going to drink the stuff? 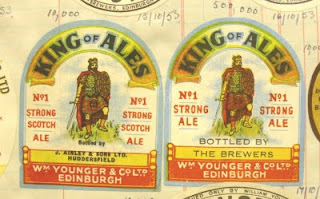 S&N had almost completely vacated the cask market (at least with Scottish-brewed beers) by the time I started drinking, so I don’t remember drinking them often. You could find Younger’s No 3 in the Bon Accord and McEwan’s 80/– was much more common in Edinburgh than Glasgow. But looking at old CAMRA publications they don’t seem to have been that well regarded. And that was then, when the real ale drinker had little choice. Now, with fifty-odd Scottish micros and lorryloads of cask ale from south of the border to choose from, McEwan’s will have to be better than it was when the 2002 GBG described it as “thin-bodied with a cloying metallic, caramel flavour … bland and sweet.”

Perhaps the plan is to go head-to-head against the ubiquitous Heineken Deuchars IPA, in which case the well-known McEwan’s brand will be a major advantage. It has to be admitted that the brand is a lot better than the beer is. I saw one commentator speculating that the McEwan’s brand was past its sell-by date and forever branded as old-man beer. I don’t think so. Innis & Gunn has not done too badly with its faux-Victorian packaging attempting to suggest it has some heritage. McEwan’s and Younger’s on the other hand have actual real heritage, which must be worth something. I do hope very much, though, that Wells won’t be dressing any ageing alternative comedians up as the Cavalier and Father William.

The news does shed light on one mystery. This year a couple of Younger’s-branded cask beers appeared in a few pubs, and disappeared as quietly as they had arrived. There was the welcome return of No 3, which I wrote about a few months ago, and an odd thing called 1749 which I haven’t tasted. 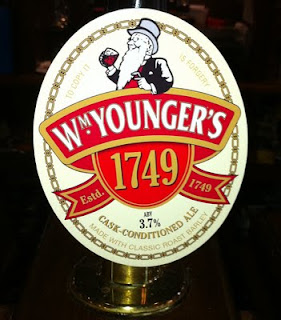 I was at a loss to explain what these Younger-branded beers were actually for. Keeping the brand visible? The odd bit of spare capacity at Caledonian and someone said “Let’s just knock out a gyle of Younger’s and flog it in the free trade”? Now I suspect it was covert market research to see what value the brand had.

With W&Y also reviving Courage Imperial Russian Stout, perhaps we could see Younger’s No 1, or even 140/– Ale. With a bit of imagination there could be life in old Father William yet.
Labels: heineken legacy brands mcewans wells and youngs youngers
Location: Edinburgh, City of Edinburgh, UK