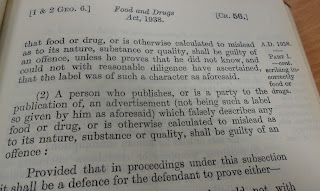 From the British Food Journal, January 1944:


At the Newcastle Borough Court, on December 22nd, James Calder & Co. (Brewers) Ltd. were summoned for selling a bottle of stout labelled “Milk Stout” and bearing the design of a dairy cow. The prosecution submitted that the picture on the label was misleading. Pleading guilty for the firm, Colonel A. D. S. Rogers said the labels had now been withdrawn. Before the war ingredients for the stout came from New Zealand, but shipment had now stopped. There was no attempt to mislead the public.—Defendants were convicted and find £5 and ordered to pay £4 19s. costs.

In a similar case, Tennent’s of Glasgow decided to plead guilty to avoid bad publicity:


It was reported that a prosecution has been raised against the Company at the instance of the Chief Inspector of Weights and Measures at Newcastle-upon-Tyne alleging that a sample of Tennent’s Milk Stout purchased at Tweedmouth in November last did not, upon analysis, contain constituents justifying this description, and that consequently an offence had been committed under Section 6 of the Food and Drugs Act, 1938. The complaint is due to be heard before the Petty Sessions at Berwick on 17th February 1944.

The Board gave careful consideration to the whole circumstances, including the fact that prior to any intimation being received from the Inspector the use of the name “Milk Stout” had, in fact, been discontinued, as a result of correspondence with Messrs. Boake Roberts & Co. Ltd., the suppliers of the lactose incorporated in the Milk Stout. The Board were satisfied that it was obvious the Company had throughout acted in good faith, but they felt that, in the circumstances, the course least likely to involve unwelcome publicity and thus be detrimental to the Company's interests would be to plead guilty to an offence under Section 6 of the Act; this plea should, however, be submitted with an explanation of the position as described by the correspondence between the Company and their suppliers of lactose, making it clear that the Company does not regard the product being sold as ordinary Stout; that it had all along acted in good faith; and that in any event the necessary steps had been taken to discontinue the use of the label complained of, prior to any communication being received from the Inspector. It was decided to instruct Messrs. Wright Johnston & Mackenzie accordingly. (17/1/44, Tennent’s board minutes held at the Scottish Brewing Archive)

Judging by the closeness in time of these two cases, it looks like a case of a particularly zealous weights and measures department at Newcastle town council. It would be interesting to find out if there were any more prosecutions, or in other cities. 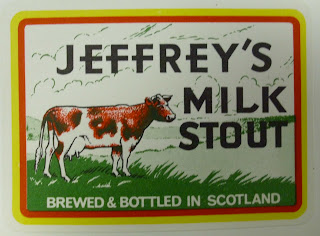 The legislation in question, the 1938 Food and Drugs Act, does state that food products may not be sold under misleading designations:


A person who gives with any food or drug sold by him a label, whether attached to or printed on the wrapper or container or not, which falsely describes that food or drug, or is otherwise calculated to mislead as to its nature, substance or quality, shall be guilty of an offence, unless he proves that he did not know, and could not with reasonable diligence have ascertained, that the label was of such a character as aforesaid.

A particularly strict reading of it might indeed infer that you couldn’t call a beer milk stout if there were no milk in it, and as we have seen this is what appears to have happened in Newcastle. It also seems likely that producers would be able to defend themselves on the basis that milk stout drinkers knew full well that it was a beer, not a milk drink, just as nobody mistook milk of magnesia for milk either.

The usual received wisdom in the beer world is that the term “Milk Stout” was banned in the UK shortly after the Second World War. Michael Jackson wrote in his New World Guide to Beer: “Within Britain, it may no longer be identified as Milk Stout, as it once was”, and I, like everyone else, took it for granted. Roger Protz states baldly in his Ultimate Encyclopedia of Beer: “the government instructed all sweet stout producers to remove the world ‘milk’ from labels and advertising”.

The story is, as you might have guessed, repeated in the new Oxford Companion to Beer, describing the words as ‘an illegal label designation in the UK’ in the entry on Mackeson, and telling us in the entry on milk stout itself: ‘During a period of food rationing following World War II, the British government ordered its brewers to delete the word “milk” from their labels and advertisements’.

But if it was banned, when was it banned?

I took a trip to the library to try to find evidence of a ban at the end of the war. I've now been through all the Statutory Rules and Orders from 1944 through 1947 and can’t find any mention of Milk Stout. There is actually very little mention of beer of any type.

This is, remember, a time when food rationing and extensive state control of the economy were in effect, in a way that is hard to imagine today, and the government was grimly regulating everything—from the composition of mayonnaise, to the number of fasteners permitted on women’s underwear and the maximum price of fountain pens. But they did not seem to think it necessary to interfere with Milk Stout. 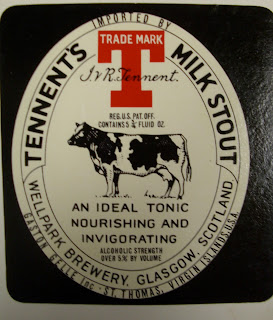 It’s certainly true that the biggest Milk Stout producer, Mackeson, had removed the word Milk from its label by the early 1950s at the latest. And, as we have seen above, the lack of a formal ban didn’t prevent brewers from facing occasional prosecutions — and convictions — on the grounds that the name was misleading. Perhaps in the circumstances breweries were running scared and decided to avoid the potential risk.

Nonetheless there is some surviving evidence that several breweries were still producing and selling Milk Stout well into the 1960s. It was the predominance of Mackeson’s and the general decline of Milk Stout’s popularity that did for them, not a ban of the name.

If anyone has some hard evidence that breweries were forbidden by the government from calling their beer Milk Stout, I’d love to hear from them.
Labels: calders food and drugs act 1938 laws milk stout scottish brewing archive sweet stout tennents