The Gravity Book was right, I was wrong

Do not doubt the Gravity Book. That should be the lesson. Or, more generally applicable, don’t assume that because something is the case now, it was necessarily so in the past. 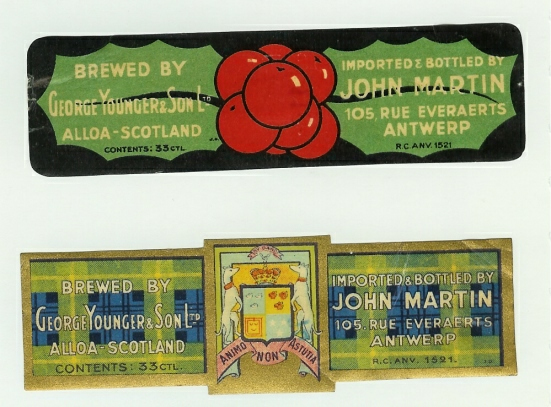 As detailed in this post on Ron’s blog, the Whitbread Gravity Book states that the two best-known brands of Scotch Ale for the Belgian market in the 1950s, Gordon Scotch and Gordon Xmas (still available today), were brewed by George Younger in Alloa. This struck me as odd because one thing we did know was that these brands, as far back as anyone was aware, had been brewed by McEwan/Younger/Scottish Brewers in Edinburgh.

Would Whitbread have got their Youngers mixed up? It didn’t seem very likely, but we couldn’t think of any other explanation. Back then brewers didn’t contract brew for each other willy-nilly and sell brands to each other like they do today, as far as we knew.

Dyranian provided proof that the Gravity Book was right, in the shape of neck labels clearly stating that the beer was brewed by George Younger in Alloa. He also offered a more plausible explanation: After George Younger closed in the early 60s, the importers John Martin were left with a successful brand on their hands with nobody to brew it. So presumably they went in search of another brewer, and found McEwan’s/Scottish Brewers in Edinburgh.

A memoir of retired McEwan’s employees in the Scottish Brewing Archive, which I’ve quoted before, states: “Prior to Gordons Scotch Ales being made for Belgium after the relationship with Clark Doull McEwans had exported E/2B of 1088 gravity as Scotch Ale.”

That seems unambiguous. McEwan's had been exporting E/2B as Scotch Ale, and then started making Gordon Scotch Ale. Clark Doull appears to have been a prominent figure in the brewing industry in the 40s and 50s, but what exactly his relationship with McEwan’s was, or what bearing it had on the Belgian trade, I do not know.

Indeed McEwan Scotch Ale and Gordon Scotch Ale both appear in the Gravity Book during the same period. McEwan’s was slightly lower in gravity – 1.088 as opposed to Geo. Younger’s 1.090 — but made up for it by attenuating down to 1.020 as opposed to 1.029. Another point of interest is that both George Younger and McEwan were also brewing a Strong Ale for the home market a good 10 points lower in gravity than what they were exporting to Belgium as Scotch Ale.

Why the contract didn’t just stay with Northern Breweries, the group which took over George Younger and itself subsequently disappeared into Bass/Tennent Caledonian, is the second part of the mystery. Sweetheart Stout, the other famous George Younger brand, of course ended up with Tennent’s and is still just about hanging on today, with George Younger’s name still on the can. Perhaps they were short of capacity, or weren’t interested in the business. McEwan’s made Gordon Scotch for another forty years or so until that brewery also closed, so maybe passing up the contract wasn’t the shrewdest decision.