Roggenbier: Dornbusch gets it wrong, again 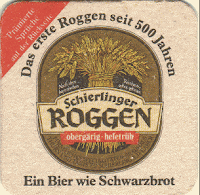 It’s bash Horst Dornbusch week over at Shut Up About Barclay Perkins, and I’m joining in the fun.

Self-proclaimed beer “expert” Horst Dornbusch has got a detailed website with a long list of descriptions of German beer styles.

Each article is generally made up of some vague historical ramblings, some usually unobjectionable tasting notes and, if you’re really lucky, some populist Cold War politics incongruously shoehorned in. Then he goes over the article again and spikes it with choice gems of utter made-up garbage.

So with the article on Roggenbier. Lots of people in America appear to believe for some reason that Roggenbier — in its modern form, basically a Bavarian wheat beer made with rye instead of wheat — is a major German beer style. Still, at least they have heard of it, which is probably more than most Germans have. In fact it’s a novelty beer and I doubt the number of breweries who make it reaches double figures. It is not remotely comparable with the popularity of wheat beer.

Did I mention Dornbusch seems to specialise in putting the most ridiculous stuff right at the beginning? That’s handy at least. We are told:


“Roggenbier is a medieval ale usually made from a grain bill of about half barley malt and equal portions of wheat and rye malts. Today, a Roggenbier may be either an ale or a lager. Modern renditions of the brew have about 5 to 5.5% alcohol by volume. Rye ales are mildly hopped, which allows the grain flavors to be dominant. Filtration appears to be optional in a rye ale and many, such as the Paulaner (depicted right) are "naturtrüb," meaning naturally turbid. A yeast-turbid Roggenbier is more authentic, considering that the style had been around long before beer filtration was invented in 1878.”

Where shall we start?

Well, for one thing, it’s not a medieval ale. There were medieval rye beers, but there is no connection between them and modern Roggenbier. Rye beer was extinct in Germany until Schierling/Thurn & Taxis started making it in the 1980s. It was such a novelty that they were able to get a patent on the modified mashing regime they used. And it certainly isn’t “a lager” because you’re not allowed to put rye in bottom-fermenting beer. You would think he’d know something as basic to modern German brewing as that.

According to Ludwig Narziß — a genuine expert — it’s also obligatory to have at least 50% rye malt in the grist in order to label the resulting beer Roggenbier, not the 25% Dornbusch claims.

Filtration optional? It’s more that the wort is so goopy that the beer remains cloudy even after filtration. Thurn & Taxis state in their patent application that the beer is filtered, as this improves head retention.

It would be more accurate if Dornbusch said “A turbid Roggenbier is more authentic, since it’s the only bloody way a 70% rye beer is ever going to turn out without the use of the most space-age filtration techniques and exogenous enzymes.”

To sum up: Horst Dornbusch doesn’t know the history of modern Roggenbier. He hasn’t read the very short section on brewing with rye in Narziß, one of the standard German brewing manuals. He hasn’t read the patent written by the people who invented the modern Roggenbier, and he apparently doesn’t even know what ingredients the Reinheitsgebot allows in top-fermenting beer.

There’s nothing useful any beer lover can learn from Horst Dornbusch, except perhaps how to pass yourself off as an “expert” to the credulous.
Labels: charlatan claptrap horst dornbusch roggenbier