Like any manufacturing process, making beer involves compromises. You want to make the best product you can, but also make it for a price that your customers will pay, and it also needs a reasonable shelf life and a minimal amount of waste.

The price for drinking fresh, unprocessed beer is a compromise, in a way: you have a perishable product which will go flat and sour if you're not careful, and if that happens the beer quality is compromised much more than by any processing.

You can pasteurise beer to give it stability. Many people think it doesn't taste as good, but on the other hand it's a lot nicer than an unpasteurised beer that's gone off.

You can filter beer, again to give it stability and to make it nice and clear. But you filter out flavour.

You can use extraneous CO2 to protect beer from the atmosphere. Overdo it and you wreck the beer, making it fizzy and acid, but that's just incompetence.

Bean-counters will tell you none of these damage the beer, or that the advantages outweigh the disadvantages. Well, maybe. Really flavourful beer can withstand several such compromises and still be good. Some beers don't survive much compromise. Some beers only really work direct from the cask because they're so subtle.

This brings us to the current debate about cask-conditioned beer versus keg.

"Keg" has been a dirty word among British beer drinkers for the last forty years because the accepted definition of it — by drinkers and brewers alike — has been pasteurised, filtered beer, force carbonated and served by CO2 pressure. Much of it wasn't that good to begin with and the number of flavour-compromising processes it goes through doesn't make it any better. 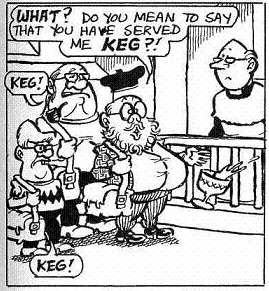 If you now start telling people that keg is the future, don't be surprised if their first reaction is "Ewww."

It's more confusing since the word keg is being used interchangeably even by new-wave brewers for two quite different containers: the keg proper in which CO2 pressure is used; and the KeyKeg in which the beer is contained in a plastic bag and never comes in contact with the gas, rather like a small-scale edition of a Czech tankové beer.

The proponents of "craft keg", if they had any sense, would point out that the stuff is not filtered or pasteurised and is actually a lot closer to real ale than it is to the keg muck that CAMRA was formed to fight against. It's arguably more real than the cynical FastCask nonsense devised by Marston's to comply with the letter of the definition of cask-conditioned beer, while in reality their EPA is crap beer to begin with, and heavily processed – filtered and reseeded with yeast beads.

There's nothing theoretically wrong with a bit of extraneous CO2 to protect a slow moving beer or to propel it to the bar. None of it's necessary though. Drink beer while it's fresh and still has condition; that's common sense, like eating your cheese before it goes mouldy (of course there are exceptions, both in the world of beer and the world of cheese). Serving artificially preserved beer is like a restaurant reheating yesterday's soup. You can do it, and it might still be very nice, but the first-rate establishments don't do it.

The less you do to beer the better it is. Brew it, ferment it, rack it, drink it. I love that simplicity. So I drink real ale.
Labels: camra cask beer keykegs proper real keg real ale