Hops in the hills 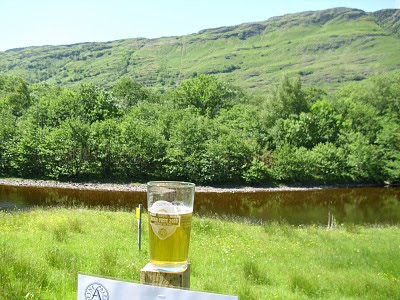 Regular readers will know that Argyll's Fyne Ales is one of my favourite breweries. Everything they do seems to be excellent. And, for once, other people seem to agree with me with the beers winning multiple awards. So I was delighted to hear the announcement of a beer festival at the brewery, and made the trek up the West Highland Line when the weekend finally came.

I have nothing against the provincial town halls that most beer festivals seem to be held in; in fact some of them are rather nice, but they just can't compete with Argyll in summer. Stunning scenery all around the brewery and the beer tent set up in the brewery yard made for a delightful setting. Best of all, you don't get stewards at the entrance saying "Sorry mate, can't take your pint outside"!

As well as a good half dozen of their own beers, other brewers were represented, most prominently Oakham and Thornbridge. Both have a Fyne connection – brewer Wil Wood worked at Oakham previously, while Fyne Ales was Kelly Ryan's first job in the UK, if I've got my facts straight. Apparently Wil had also been nipping round the country picking up a few extra guest beers from lesser known breweries. 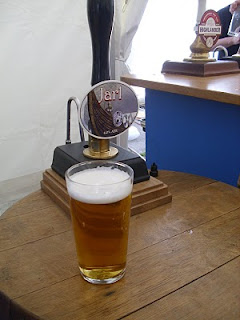 Pride of place in the middle of the bar, however, was given to a fake barrel containing a cask of Jarl, a new Fyne seasonal for summer. It's a beer in the same pale-and-hoppy vein that Wil helped make a trademark at Oakham and that's now fast becoming a trademark of Fyne Ales. More than that, it's made with the extremely fashionable new Citra hop variety. Hop merchants are rationing this hop and Fyne have only managed to get enough for another few brews, so if you see Jarl this summer, grab a pint as you may not get a second chance.

How does it taste? Well, it tastes pale and hoppy. It's a damn good beer but Citra is so over-hyped that any actual beer made with it will be underwhelming compared to the expectation. The dry hops someone left on the bar top were intensely bitter and orangey; I didn't pick orange up in the finished beer, though I did get flavours that I've tasted in Pilsner before (this is a good thing), and some lemon and lovely lager malt. If I'd thought of it I could have taken the chance to compare Jarl to Hurricane Jack and Avalanche directly. Direct comparisons, though, are difficult when you only have the one glass. I followed the first Jarl with a half of Avalanche, but that didn't seem its usual self at all, tasting rather biscuity.

Other beers I tried were Whim Ales' Schneeweiss wheat beer, which was disconcertingly clear and tasted of chlorine and coriander, and Thornbridge Pollards, a coffee milk stout. I do love a milk stout, yet I'd rather have had it without the coffee – coffee, like whisky, is a noble drink best enjoyed separately. Murmansk was also on, but I'm a softy and drinking 7.4% beer in the sunshine does my head in so I only had a little taste. Actually, I didn't do much scooping at all. There's no point when the host brewery's stuff is so good. I went back for several pints of Jarl and Highlander. Marvellous as the poppy beers are, I think Highlander may be the best of all. It's the kind of beer where you don't need tasting notes, you just say "Try this. You won't regret it." But you could say that about the entire range here. Which is just as well, because my notebook tells me I also had some Cairn Dhu and Innishail, for which I have no tasting notes. Scandalous, spending a festival just drinking beer and enjoying it … I can't wait for next year!

On my way home I was brought down to earth again with a bump when I dropped into a pub to wait for my train. With one of the finest real ale breweries in Scotland on their doorstep, they were serving Old Speckled Hen. After a semi-magical festival, it was a sad reminder of how desperately clueless so many publicans still are.