Training hops in a pandemic

People who like illustrated books, or hops, or both, might be interested in a charming little book based on hop-growing in the Hallertau region this summer.

It is the product of the coronavirus pandemic, which has changed the course of many people’s lives in quite unexpected ways.

Hopfen anbinden: Saisonarbeit in Zeiten von Covid-19: Ein Tagebuch is a diary by Berlin writer  Alexandra Hamann, who in March found client work drying up. At the same time, due to travel restrictions, hop growers were crying out for labourers, because the migrant workers who usually work on the hop fields were unable to enter Germany. Hamann decided to give hop training a go, and her diary of two weeks in Bavaria, illustrated by Julia Kluge, became an educational comic of the type Hamann produces in her day job.

I like the diary for the direct encounter of an outsider with the world of hop growing. The childish lettering reinforces the feeling of being on a school trip rather than poorly remunerated seasonal labour. Details of work, such as the description of sitting on a beer crate to train the hop bines, are something you don’t really read elsewhere. A red line around one drawing is simply labelled “fence to keep deer out”. 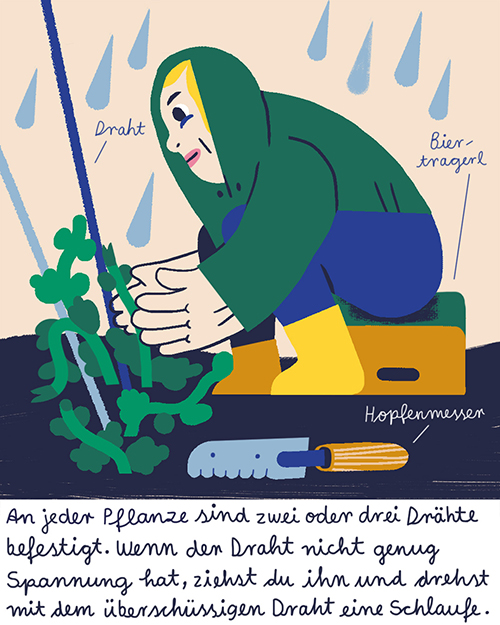 We get simple diagrams of anthropomorphic hop cones joyfully exclaiming “I give beer its bitterness!”, and meet Hamann’s co-workers, others swept here by the pandemic: food truck operators, jugglers and sword-swallowers who have no work this year as all the festivals are cancelled; a photographer who like Hamann has also seen freelance jobs collapse; but also locals who have taken time off from their normal jobs to help.

It is all a little twee, but there is a serious edge: by the second week Hamann starts to wonder if the pesticide use is sustainable. Worse still, the seasons have become unpredictable, and the weather, despite the mud, is too warm and dry, which is why new hop cultivars are bred for a drier climate as much as for flavour. In ten years we won’t be able to grow hops, warns the hop farmer ominously.