The filthy state of the Alloa Brewery

In 2001 the Scottish Brewing Archive Journal published a piece from the archive in which the shockingly dirty conditions at Arrol’s Alloa Brewery in 1916 are revealed.[1] I understand the SBAA is currently working on a new website which will make old issues like this accessible online, but in any event most of the report is quoted in three blog posts from Ron Pattinson in 2012. [4, 5, 6]

That report was written by A. J. Heslop, brewer at Robert Deuchar’s in Duddingston and describes in some detail the problems at Arrol’s, from contaminated well water to huge amounts of old, acid beer slowly festering in the cellars.

Now Edd Mather [3] has come up with a similar document from the Tetley Walker archive, also complaining about the grime and filth at Arrol’s [2].

This document, by Robert Hutton, must precede the Heslop report, quite simply because it’s dated 10th January, so too early for any other report to have come before it in 1916.

It appears that Hutton, whoever he was, was the first person initially asked to investigate problems with the beer quality, and his findings were so alarming that a second, more in-depth investigation was commissioned, which became the longer Heslop report quoted in the SBA Journal.

Hutton addresses his report to Col. W. Hall Walker and copies in Farquhar Deuchar, who as we learn in the very first paragraph, was the one who had sent Hutton to Alloa to take a look.

Farquhar Deuchar (1863–1947) is almost certainly the son of Robert Deuchar the Edinburgh/Newcastle brewer – especially since Heslop, the author of the subsequent report, was a brewer at Deuchar’s. However, what connection Deuchar had to the Alloa Brewery is a mystery to me – although Arrol’s was also heavily involved in the trade on Tyneside, having bought up several breweries there (J Meikle; William Turnbull; Dove & Newsome Baxter), probably for their pubs.

Colonel Walker (1856–1933) was the MP for Widnes and presumably involved in senior management at his father’s brewery, Walker’s of Warrington.

This is the puzzling bit. All this was long before Walker merged with Tetley and Ind Coope Allsopp in the 1960s – it was even before Allsopp’s took over the Alloa Brewery – so I am not really sure what connection Walker had to Arrol’s or what Deuchar had to do with either of them.

So why do both Hutton and Heslop address Deuchar and Walker repeatedly in the second person, as if they owned the Alloa Brewery? Hutton: “I propose to shut down your large copper”, “your maltings”, “you have no stores in Newcastle”; Heslop: “the trouble at your brewery in Alloa”, “your stock of Indian and Californian barley”, “your brewer”, “your directors”.

I visited the above Brewery at Mr Deuchar’s request, and I have no hesitation in saying that the beers are all wrong. The Brewery itself is wrong, being very dirty throughout with a large quantity of rotten wood lying about in every department except where you have put up your new brewhouse and steam coppers. The cellars are in a horrible state of dirt and stench. The Cooperage is very dirty and untidy with a lot of old useless casks lying about in yard &c. All this rubbish must be cleared away or burnt before the spring.

6 qrs Indian to be used instead of Cali, as the Cali is finished for a month (at least I am so informed by the Brewer).

Sparge the same as at present but boil a quarter of an hour longer. Do not use your large copper of 250 barrels capacity (it is too large). Had my opinion been asked re a steam boiling plant, I would not have agreed thereto, but you must make the best of it at present.

I propose to shut down your large copper and use the small ones of 120 barrels capacity, but not to charge them with more than 100 barrels and subject them to a vigorous boil.

The mill room is starved and the malt before grinding not comfortable; also an open cold water tank should not be in the same room.

3rd. I cannot understand why you are allowing Distillers’ malt to be made in your maltings, as the same man cannot make Ale brewers’ malt to my liking, and you have all the dirt and dust about from the Distillery malt; besides; the double kilns want experience to work them.

4th Fermentations. Your fermenting room requires more ventilation. The copper vessels are all right, but the wooden ones require seeing too.

The cellars are very dirty indeed, and you ought to have them well scrubbed; in fact, shut the worst of them off entirely. You are also keeping by far too much stock of ales.

What I propose is, to rack brighter and hop down, roll for four days, bung down during the day, and bung up at night, and not poroused. (A turn over does as much good as a long roll). Prime when sent out the fifth or sixth day (say two quarts in winter and one quart in summer) per brl) to Newcastle. It would be better still if fined before stillaging, but as you have no stores in Newcastle and cannot manage to fine the Ale before stillaging, you must get a quicker delivery and not from five to six days after fining at the Brewery, which, your Brewer tells me, is the present custom.

You also require to use a thicker fining and not so diluted as you are doing. You are porousing your beers at present, and I again state, keeping far too much stock. It is no wonder that the beers do not give satisfaction; they are flat and stubborn to fine, and are aggravated by your method of boiling & c.

Coming back to the boiling; with the small coppers, a pressure of 120 lbs per sq inch must be kept steady at the boilers. I understand that you harden your brewing water. I would like the analysis and a lot of other particulars if this change does no good. I, however, strongly recommend you to change one thing at a time so that you can definitely locate the trouble.

The same alterations also apply to the Mild Ale; only use Scotch malt and foreign, half and half. If you could get some English malt, say Norfolk, and Cali, half and half, and use the heats I have proposed, you would do well.

I spoke to the Brewer re steaming the pipes out every Saturday[.] Brush them first, then blow naked steam from the boilers (when not using it for the Coppers). I hope that you have plenty of steam for the Cooperage.

I recommend you to make your own finings or buy from Boake Roberts & Co. London.

I would again suggest more aeration at the Refrigerators. Your receiver is too small, but I only want to make one alteration at a time.

We may try a brew with less pitching yeast per brl and pitch a degree higher with twelve hours longer in the settler before racking. 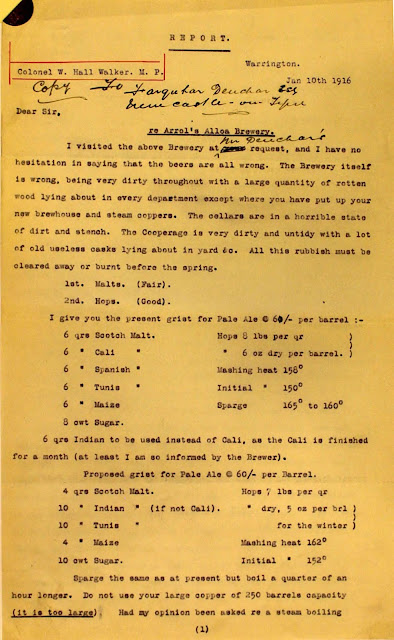 There is quite a bit of interesting information in the document.

We learn that the Alloa Brewery was producing its own malt, common practice for the time. However, we are also told that distillers’ malt was being made as well, and Hutton’s shocked reaction to this suggests that was not a common practice. Distillers’ malt is made to a different specification to brewing malt, but I don’t know why Hutton thought the same maltster would not be able to make both, or why the distilling malt was thought to create more dirt and dust.

There is confirmation that the brewery were hardening their water – which in turn confirms everything else I have ever heard which said that Alloa water is extremely soft.

Even better: we’ve got a recipe for Arrol’s 60/–. There aren’t really any great surprises in it.

The major changes Hutton suggests from the previous recipe are cutting the rate of hopping, both in the kettle and dry hopping. Then he cuts some of the maize and replaces it with additional sugar. It looks like this is a straight swap; the quantity of malt remains the same at a total of 24 quarters.

I am not sure why you would dry hop only in winter. Wouldn’t the preservative effect be needed more in summer?

The mash heat already seems a little on the warm side by modern standards, but his proposal is to mash a tad hotter still. The combined effects of these changes would be to produce a slightly fuller and less bitter beer.

That would be no good, of course, if nothing were done about the manky brewery, which jeopardised the quality of any beer made there.