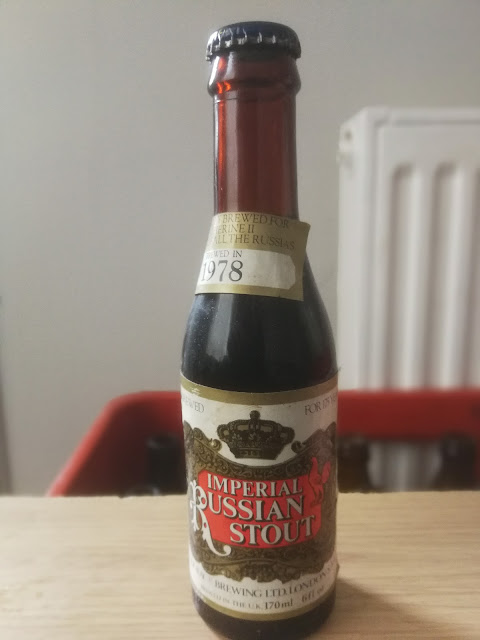 A few years ago, I acquired a box of old beers, which have been sitting in a corner ever since. Some look more exciting than others.

One of the exciting ones is a bottle of Courage Imperial Russian Stout from 1978. I’ve never had one this old, so decided to crack it open.

Now that every other brewery in the world seems to make something they call Imperial Russian Stout, it is quite difficult to imagine the peculiar status the original Courage beer had back in the 70s and 80s. I am lucky to be old enough to have tasted it in the early 1990s when Courage had a bit of a marketing push on it, giving it a fancy new Constructivist-style label.

More recently I enjoyed the revived version that Wells & Youngs produced in 2012, although I seemed to always order it as a rather expensive treat in Edinburgh pubs when I was already quite drunk. I thought that was still a lovely beer, even though it did not have the classic secondary fermentation with Brettanomyces. 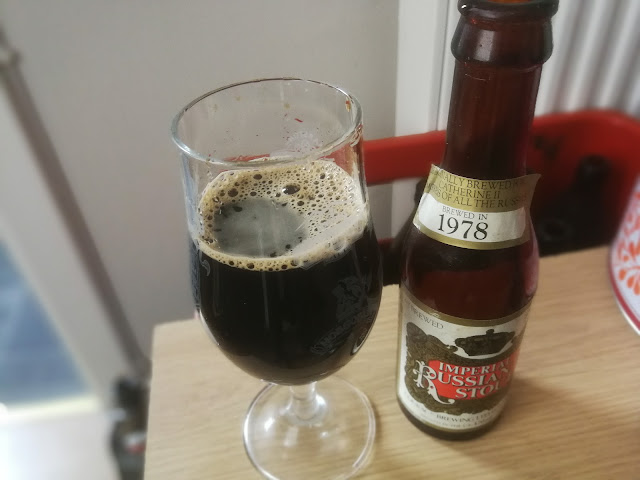 First waft of the 1978 bottle on opening: well they certainly didn’t forget to dose this with Brettanomyces. The secondary yeast has completely taken over, leather, prunes, balsamic vinegar. Residual sugars have almost completely dried out since 1978, but the beer is still drinkable: still some carbonation, still quite viscous and oily, though lighter than it once would have been, yet no sweetness. Blackcurrant and some empyreumatic flavours reminiscent of wood smoke, perhaps a little smoked beef, any acrid or chocolatey notes long since mellowed out. There is still quite a bitter aftertaste on this, though it is camouflaged by the massive Brettanomyces aroma. Would probably have been better not quite so old. If you happen to also have a 42 year old bottle of Russian Stout, drink it fifteen years ago.

It’s a tragedy this beer is no longer made.

In the meantime, you might try brewing your own from this 1976 recipe that Edd Mather has recently published.